The light at the end of the tunnel

Ehsan Jabbarzadeh is focused on engineering with a purpose

Having an office on the third floor of Swearingen was never part of Ehsan Jabbarzadeh’s plan. Quite bluntly, being a faculty member anywhere was a second option.

His desire was to be involved with a startup. And in 2007, as a postdoctoral student at the California Institute of Technology, he had every reason to believe that his dream was becoming a reality. He was an integral member of a startup that seemed destined to be a sure-fire success. That was, until 2008 hit and the project’s capital vanished in the blink of an eye.

Jabbarzadeh can see where the future of engineering will be. And it just happens to be exactly where his interests lie: the mesh point between science and business.

In early 2017, Jabbarzadeh took the first steps toward beginning the entrepreneurial-based master’s. In partnership with Julianna larossi, a clinical assistant professor in the Darla Moore School of Business, and with the backing of Haj-Hariri, he developed the content and courses for the master’s in technology innovation and entrepreneurial engineering. His goal for the program was simple.

“The master’s degree is not to create entrepreneurs,” he says. “It is to instill an entrepreneurial mindset and create an appreciation for what it takes to get the product to the market.”

Having gone through the startup process multiple times, Jabbarzadeh knows that the entrepreneurial mindset is something that must be learned. Most engineers don’t naturally consider the practical application of their product, or whether it’s what a buyer wants. So with this master’s, he hopes graduates understand the economics behind what they are building.

One of his students, Le Ho, figured that out pretty quickly. Ho trekked all the way from his home country of Vietnam to join the master’s program. Now as his graduation from the CEC nears and he looks back at what he has learned, his biggest takeaway hasn’t been how to succeed in the business world. It was how to fail.

“Entrepreneurs need to know how to fail to be successful,” he says. “That’s the key. Because not everyone is prepared to fail.”

Last semester he took one of Jabbarzadeh’s classes, where he developed a product idea. Unlike engineering classes that he had taken in the past, though, this class forced him to project the market response to his product idea. With Jabbarzadeh’s guidance, he found that the product would not be profitable.

“He wants the best thing for us,” Ho said as he talked about the experience. “For my project, he told me it was a no-go. The number of customers wasn’t good enough and the market was too small to invest in.”

It was a short-term failure that made his next product idea stronger and more practical. And now as he prepares to present his new idea – a van and moped that deliver groceries – to the UofSC I-Corps program, the customer’s needs are at the forefront of his mind.

Jabbarzadeh knows that every member of the program won’t be a startup founder or the next Bill Gates. And for him, that’s completely OK. He says that this program will help students such as Ho advance faster in even the most traditional engineering jobs by giving them an appreciation for what it takes to get a product to the market. And he believes that skill is only becoming more valuable in the workforce.

Even outside of the master’s program, Jabbarzadeh applies his business background to everything he does. This includes his current research on spinal cord injuries and wounds, and the application-based mindset he has cultivated in his lab.

Sara Moghadam, a post-doctoral student helping him with his research on wound healing, feels that this lab is different than any environment she’s been in before. She says that her background has always been in “pure science,” from her undergraduate studies to the completion of her doctorate. But now in Jabbarzadeh’s lab, she is doing more practical work. And it has made a world of difference.

“I am doing more because I am making a transition here from science to more application,” she says. “I love it!”

With the guidance of Jabbarzadeh, she is creating a solution to cure minor wounds faster. Many minor injuries, she says, take too long to heal with current medical offerings. These small cuts become easily infected, potentially changing the medical situation from a minor issue to a life-changing emergency. Her research may be years away from the market, but Moghadan already has her eyes on a goal.

“If this goes successfully, it can be a company or it can be a product,” she says. “Just science alone is good, but my goal is to get to the point where I have a product that helps people better.”

The same can be said for Maria Yanez, a post-doctoral researcher also working with Jabbarzadeh. She works in the same lab with Moghadam – their desks are just three feet apart – but her research focuses on the regeneration of tissue in spinal cords. While their research differs, their long-term view toward the future does not.

“In ten years, somebody can hopefully try to use this technology to improve health,” she says.

From his lab to his classroom, Jabbarzadeh has always emphasized the purpose of engineering as much as the engineering itself. It’s his passion. Through it all, he knows that by bringing that passion to this university, he is helping create a well-rounded experience for the CEC’s students.

“I think at the end of the day, not every faculty should become an entrepreneur,” he said. “We have to find who is interested in what and leverage the strengths of each member. Some faculty are really great teachers, some excellent researchers, and others technologists. And I think for a university to succeed, it should create an ecosystem for all three to thrive.” 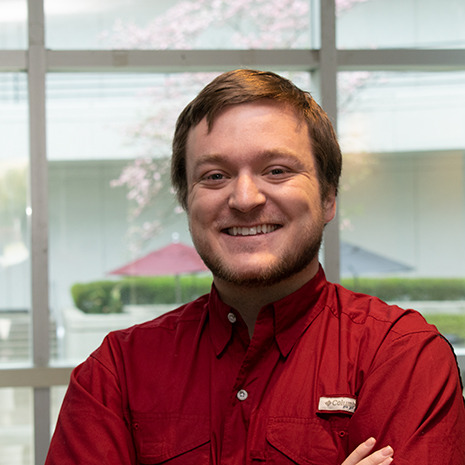 Tyler Dillard graduated from the College of Engineering and Computing in 2018 with a bachelor’s in mechanical engineering but dreamed of being a manager at NASA or a businessman. When he heard about the college’s new entrepreneurial engineering master’s program, he saw a way to ground those business-minded dreams in reality. Now, a year later and just months away from graduating with his master’s degree, he sees that the program has provided him with the entrepreneurial mindset he needs to achieve his dreams.

“This program helps you from the concept of your dream to reality,” Dillard says. “It guides you from the first thought to the investor’s hands. It helps you create business plans, helps you find your customers and who will want the product. This program has provided a frame of reference for all the stuff I need to plan ahead for my future.”

As well as preparing him for a joint business-engineering future, he has also seen the effect that the master’s had on the thought processes of his classmates.

Dillard says, “Originally, everyone was answering questions very literally, like how you would expect an engineer to answer. But then, as the program progressed and as we were challenged to think more creatively, people started coming up with off the wall solutions and methods to try.”