Diagnosing the world's most infectious disease

Estimates project that in 2017, 10 million people were infected with active tuberculosis and 1.3 million people died from the disease. One assistant professor of biomedical engineering in the College of Engineering and Computing knows it doesn’t have to be this way. Chang Liu has seen the statistics—TB infections in the U.S. are practically non-existent, but infection rates continue to soar worldwide. Now, his team is creating a portable device that can help diagnose TB patients in even the most resource-limited areas of the world.

With a two-year $250,000 grant from the National Institutes of Health, Liu is assembling a research team of four graduate and post-doc students to create and miniaturize a test that can detect TB antigens in the blood using nanopore technology.

“Nanopore technology has great potential to be developed into an accurate, rapid, easy-to-use, portable diagnostic device that can be deployed to TB high-burden areas.”

While TB infections are rare in the U.S., infection rates are climbing rapidly in countries with limited resources and high co-infection rates of HIV. In these areas, medical professionals still rely on the outdated and inefficient TB culture test, which often produces inaccurate results.

“For patients co-infected with HIV, more than 60 percent are missed by the culture test, and for children it’s difficult just to get a sputum sample,” says Liu. “And even then, their sputum may not contain enough TB bacteria to be detected.”

When these patients aren’t diagnosed quickly and accurately, they may not receive treatment, and the disease can spread even further, especially to others in high-risk populations. That’s where Liu’s research team comes in—the tool they develop will ensure that every diagnostic test is accurate and will ultimately reduce the spread of TB.

In his previous research, Liu discovered blood-based antigen biomarkers that can be used for TB detection. These biomarkers are far more accurate than the current culture test, but detecting them depends on mass spectrometers, which can cost hundreds of thousands to millions of dollars and need highly-trained personnel to operate.

“These resources are just not available in most areas with high TB infection rates,” says Liu. “Nanopore technology has great potential to be developed into an accurate, rapid, easy-to-use, portable diagnostic device that can be deployed to TB high-burden areas.”

The nanopore-based test relies on a membrane with a single nano-sized pore placed between two electrolyte-filled chambers. A voltage is applied across the membrane, creating a current through the nanopore; this is the baseline measurement. When antigen peptides extracted from the blood move through the nanopore, they temporarily block the current, causing it to drop. These drops are then measured and compared to the baseline to determine if they are TB antigens. If so, the diagnosis is easy and unmistakable.

Right now, the team is preparing to test blood samples collected from children at the Desmond Tutu TB Center in South Africa. Once they have reliably identified TB biomarkers using their in-house instrument, they will begin building smaller, cheaper nanopore devices that can be used in developing countries to efficiently and effectively diagnose TB in all populations.

Liu says that the new nanopore diagnostic devices are unlikely to impact people that are already infected with TB. But, he says, “we can diagnose new TB infections earlier and with better accuracy. Then treatment can be implemented as soon as possible to prevent further transmission of the disease.”

The World Health Organization set an ambitious goal of ending TB by 2030. Liu is hopeful that his nanopore research will be an important piece of the puzzle that will ultimately eradicate TB—the world’s most infectious disease. 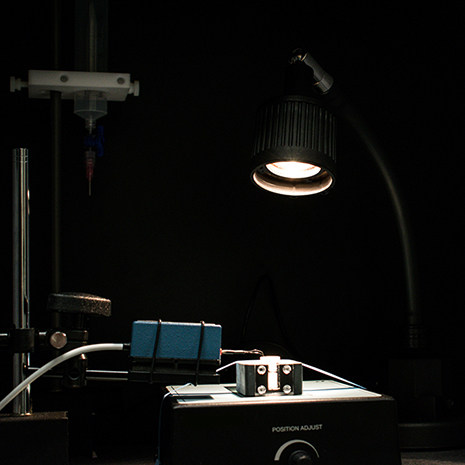 “If we can diagnose new TB infections earlier and with better accuracy, then treatment can be implemented as soon as possible to prevent further transmission of the disease.”
—Chang Liu