You can 3D print anything, even a drone.

That’s exactly what senior mechanical engineering student Andrew Re did. Over the past several months, he created a custom research drone through the McNair Junior Fellows Program. This process started after a control theory class where he initially gained interest in the topic. He was then challenged to build one from scratch.

“I had flown a drone maybe once or twice before in my life, but I had never even thought about building one,” Re says. “It was a lot of learning. And the more I learned about drones and how to build one, it felt like a giant puzzle and that appealed to me a lot.”

Re used popular, customizable drones on the market to gain inspiration for his research drone. Using the CAD software program, he created a 280-millimeter open source drone that features GPS controls, mounts for cameras and sensors and electronic motors. The drone can hold up to twice its weight of 700 grams

The first commissioned project Re is using the drone for is simultaneous localization and mapping, where he plans to use features in a room to recognize the drone’s location. This technology is great for use in GPS denied environments, such as caves.

In the future, he wants to develop a small fleet of drones to test swarm technology. Like a hive of bee, swarm technology looks at how drones can interact with each other.

In addition to doing drone research, Re is an active member of Engineers Without Borders, an organization on campus that works with the villagers in El Cedro, Ecuador, to give them engineering education on chlorinating a water pipeline. He visited the village two summers ago.

Re’s drone research opportunity through the MJF program has exposed him to the academia avenue after graduation. He is considering applying to graduate programs as well as industry jobs after graduation.

“It can be really frustrating seeing a failure over and over again but once you finally get it to work, it is so rewarding,” he says. “Like two days ago when I finally got it in stable flight, I shouted just because it’s been something that I have been working on for the past two months.” 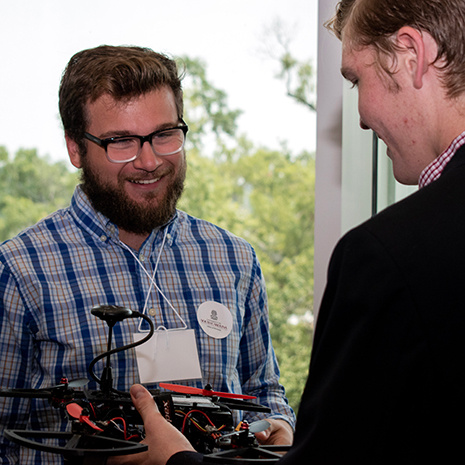 Andrew Re presented his research from the summer at the 2019 Summer Research Symposium along with the rest of the McNair Junior Fellows.

Check out photos from the symposium here!