Mulliken gives life as a Be The Match donor

Entering the second semester of junior year, most students are focused on grades, internships, future careers, or some combination of the three. But for Josh Mulliken, a computer information systems major in the CEC, his main focus was saving a life.

A week before the semester started, he received a call from Be The Match. He was told that a saliva test he had done a year earlier showed him to be a possible match for a 69-year-old in need of a bone marrow donation. They asked him if he was willing to donate.

“There wasn’t a question of whether I was going to help,” Mulliken says now. “If he needed it, I was going to do it. Nothing else went through my mind.”

In the next three weeks, he went through multiple rounds of testing to make sure that he was physically fit to donate and to confirm that he was the perfect match. Finally, on February 4, he found himself in Washington, D.C., lying in a hospital bed at Inova. As the blood left his arm and entered the centrifuge beside him, he could only smile knowing the difference that his three-day trip to D.C. was making.

“When do you get the chance to save someone’s life?” Mulliken asks. “I’m not going to be a doctor – that’s just not what I’m good at. This is a chance for me to do something that really affects a person. It’s just one person, but it affects that person in the most ultimate way.”

Be The Match is led by the National Marrow Donor Program, which over the past 30 years has managed the largest and most diverse marrow registry in the world. It works to connect its 20 million registered volunteers with those in need.

Now, Mulliken must wait. In four months, Be The Match will contact him saying if the patient needs more stem cells. Six months after that, if the recipient chooses, Mulliken will receive the man’s name and contact information. Until then, though, all he can do is hope that the donation was successful and that his match’s recovery is going well.

“He’s probably been feeling bad for a really, really long time,” he says. “So I hope that because of what I did, he will be able to feel good for the next 30-plus years. Hopefully he gets more time with his loved ones than he otherwise would have.” 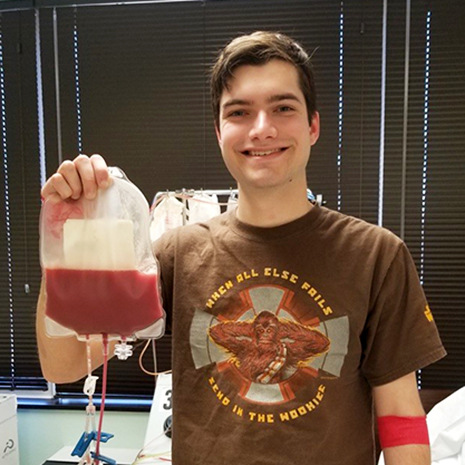 You could save a life just like Josh by signing up for Be The Match. With a simple swab of your mouth you can join the over 20 million people who have already volunteered for the registry!

Visit Be The Match's website here for more information.