Forged through fire and smoke

CEC Young Alumni Board member Olga Agafonova has launched two apps and her career from the skills she learned as a computer science student.

Smoke clouds the air of Olga Agafonova’s upstairs room, seeping through the floor boards and enclosing in around her. From within the smoke, flames jump at her like daggers and she knows she only has two minutes to escape.

With time winding down and her life seemingly nearing its end, she turns her head ­– and through the Google Cardboard glasses she is wearing, sees a floating blue arrow pointing her way to safety. Her character – holding a super cute guinea pig with black spots – turns to the right, collects a blue token, moves into an elevator and escapes the burning virtual house in her self-coded “VR Fire Escape” game.

Creating this app would not have been possible without the skills she learned during her four years studying computer science at the UofSC College of Engineering and Computing. Her bachelor’s, which she completed in 2015, set her up for her current position with the South Carolina Department of Labor, Licensing and Regulation and gave her the necessary skills needed to pursue her interests in app design, augmented reality and virtual reality.

“It’s not so much working with the backend, the databases, or the networking that gets me excited,” she says. “For me, it’s the visual stuff. To be able to see something on the screen, to do things that are interactive and moving and colorful, that’s what I really like to do.”

One computer science class in particular – titled “Critical Interactives” – inspired her to start designing apps. The class, taught by Duncan Buell and Heidi Rae Cooley, brought together computer science students and students from the humanities to build an augmented reality app. The goal of the class was two-fold: to encourage students from the two very different disciplines to work together and to create an app that forced users to think differently about their surroundings.

Agafonova enjoyed the class so much that she opted to take it twice, working one time to help create an experiential app about the brick wall surrounding the horseshoe, and then again explaining the Ward One community and urban renewal in South Carolina. In the class she was seen as a leader, and her creative tendencies paired with her proficiency in code made her a key contributor in the class’ accomplishments.

“One of the things Heidi and I always tried to monitor was getting students to take charge in the groups,” Buell says. “We would lay out various things that could be done and students would more or less self-organize and then we look for who is becoming the group leader. And Olga was one of those leaders in both classes.”

The experience inspired Agafonova to dive deeper into the fields of VR, AR and app creation, eventually leading her to create the VR Fire Escape app and her recently developed “Inhale” app. It also prepared her to be hired as a systems developer with the department of labor immediately following graduation and led to her recent promotion as the department’s web developer.

This success – both in her hobbies and career – has allowed her to confidently look back and say that studying computer science at UofSC was one of the best decisions of her life.

“Out of all the majors at the university,” Agafonova says, “I think this one gave me the opportunity to do the things that I like to do.” 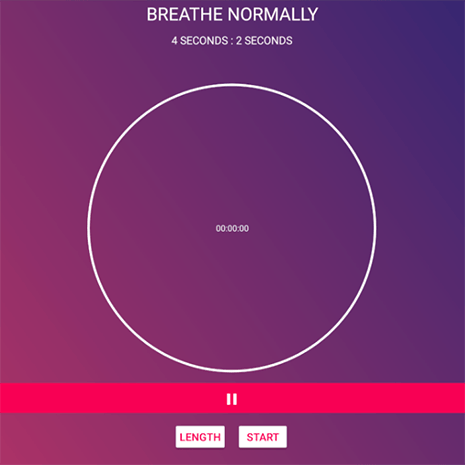 This app is available for free on the Google Play store and helps users practice 2 to 1 breathing.

Check out the app here!