A tiger built to burn

A behind the scenes look at the Tiger Burn project

With one hand on the microphone and another steadying the camera, I stand ready to finish my video setup. To my left, a two-by-four clangs to the floor as the hum of the saw that sent it there slows to a whisper, and hardhats emblazoned with “Exxon-Mobil” shimmy away to pick it up. I push the mic in, flip the camera on, and look up.

In a warehouse off Catawba Street, 50 UofSC College of Engineering and Computing students are building a 30-foot-tall wooden tiger that will be burned on November 25 to kick off South Carolina – Clemson rivalry week. Thousands will gather that night, donning their favorite garnet gear to watch the team’s creation burn to ash. Already, just twelve hours of work in and nearly a month away from the Tiger Burn event, the tiger has bones.

Pushed against the walls of the warehouse are two de-clawed boxes of equal size. To the right stands a square frame, with support beams fastened across it like a rib cage. In the middle of the room is the makings of a tiger head, and beside it a football huddle. I scan the lower two inches for Carrilho’s white Nike Air Force 1’s and find them exactly where I expect to – the center of his team’s sneaker circle.

Five minutes later, the huddle breaks and Carrilho darts over to O’Dhori Prioleau – the president of UofSC’s American Society of Mechanical Engineers – and tells her of the new adjustment. One of the boards for the head has been cut two feet short, I overhear him tell her, but it’s no problem. It’ll add perspective to the head; a tapering look. His calm voice and smile enforce the message.

He turns toward the camera.

“I’m sorry, I’m sorry!” he says as he runs over. “I just had to speak to the project leads – something came up, but honestly, I think it worked out for the best.”

He slides into the chair as the students behind him go back to work.

Building a wooden tiger just to burn it down days before the South Carolina – Clemson football game is nothing new. But, the look, feel and process of building this year’s tiger is.

As co-project leads, Carrilho and Christian Grein – a junior mechanical engineering major – have implemented a management system to increase the efficiency and organization of the project. They've split the 50 interested students into two teams – a design team and a construction team – and within each team, implemented multiple project leads that were responsible for the safety and management of their team members. Then, they implemented four shifts within the construction team, with each shift responsible for creating an individual part of the tiger.

The changes have proven to be spot-on. The frames are already built, the teams are a full day ahead of schedule, and Carrilho has been able to take a deep breath.

“At this rate, we can build two tigers in the amount of time we have,” he says.

Without the stress of worrying whether the tiger will get completed on time, the team has been able to experiment more than they ever have before. When it was Prioleau’s turn to slide in front of the camera, she described this year’s tiger as “bobblehead-like,” hinting that it will have a skinnier body and bigger head than in years past. Carrilho was even more direct.

“This design hasn’t been done before,” he says. “We are changing it up, we are being risky, but I think it’s going to pay off and set our team apart from last year’s team.”

With added weight on the head resulting from the new design, students have been using basic math and physics material learned in their introductory engineering courses to validate the design’s safety. Ross McDaniel, a sophomore mechanical engineering major and a lead on one of the construction shifts, says he was “surprised” to see how much in-class material made its way into this out of class project. He explained the process of conducting stress analysis and momentum simulations to make sure everyone will be safe even after the tiger is aflame.

Outside of maintaining safety, though, the team’s goals are simple: they want this tiger to become engulfed in flames faster and to burn longer than ever before. For the first time in the 99-year history of the event, firemen had to extinguish last year’s fire. This year, the team hopes to keep the firemen even busier by using a combination of hay, t-shirts, lighter fluid and more wood pellets to set new tiger burn records.

“If it burns how we expect it to, I will be really excited,” Prioleau says.

For Carrilho, overseeing a project of this magnitude hasn’t been easy. But through the process he helped implement and the simple mindset of “this just has to happen,” Carrilho is confident that the thousands gathered at the Greene street fields November 25 will not be disappointed. He already hears the crowd’s raucous cheers, sees flames shooting high into the sky, and knows exactly what will be running through his head.

“There might be a little disappointment there because it is a lot of man hours to build this tiger,” he says, before the left corner of his top lip lifts into a mischievous smile. “But at the end of the day, that’s an ugly mascot so it just needs to come down.” 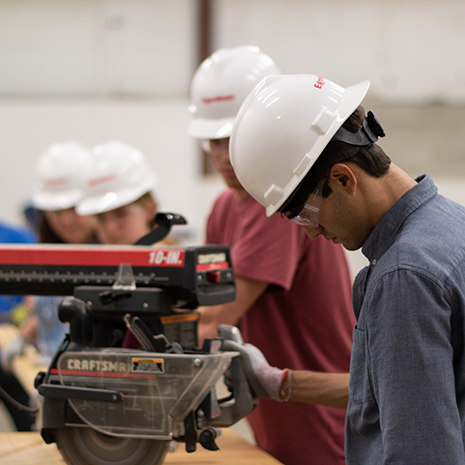 More behind the scenes photos!

Do you want to see even more of what goes into building the tiger? 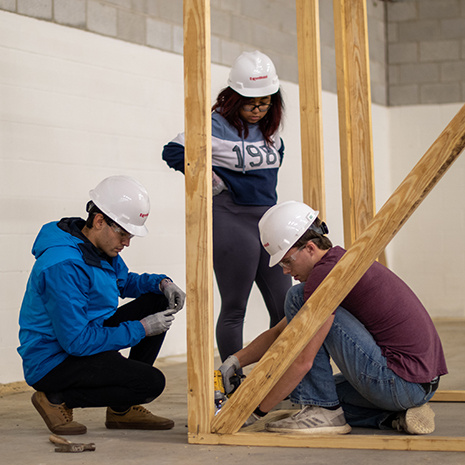 This year, Student Life is leading a campaign with a goal of raising $12,000 to offset the costs of construction supplies, contractual services, security and other event support.

If you’re interested in helping fuel the fire for this year’s Tiger Burn, visit the crowdfunding webpage.