Rub-a-dub-dub, robots in the tub

Rubber ducks tumbled like a tidal wave in a bathtub. But, in the College of Engineering and Computing Wednesday afternoon, there was no water, there were no bathtubs, and there were no humans moving the little ducks. Instead, as part of the college’s VEX event, it was robots who moved these ducks around as middle schoolers from across the state displayed their engineering potential.

For the competition, middle schoolers designed and built their own metal robots. Their goal was simple: design a robot that could lift and accurately place rubber ducks. The event was competitive, as the kids went head-to-head against opposing teams fought to win a first-place trophy.

“It’s a big learning experience for the students today, but it’s really fun,” said Krystal DuBose, the director of precollege education and the organizer of the event. “I think being able to be hands-on with the robot, show what needs to be done, and make their robot do it really excites them. And if you watch after each match they go back and tinker with it, fix it, alter it. That’s what engineering is.”

The college began the VEX robotic competition five years ago to help South Carolina’s middle school teachers become more comfortable with state’s digital learning standards. It was a way to ease teachers into the new VEX competitions while also providing the middle school kids with a fun, relaxed experience. In the five years since, it has become a huge success.

As teams battled their way to rubber duck greatness, middle schoolers also participated in another challenge that tested their engineering abilities. They were given three make-believe individuals who needed a cane. Each hypothetical individual had different ailments and different needs, and teams were challenged with redesigning a cane to best help their patient. The children were provided tennis balls, Styrofoam, tape, long pieces of plastic, and the freedom to try whatever ideas came to their mind.

Cecilia Kelly, a teacher at Mid-Carolina Middle School, summed up why the event was so impactful for her students. She said, “They get to be the engineer. They are given the challenge before they come and all they know is, ‘you have to design and build something that does this.’ There’s no blueprint to go by, it comes out of their head. So, they have to think about what the problem is; they have to understand that challenge and then go about figuring it out.” 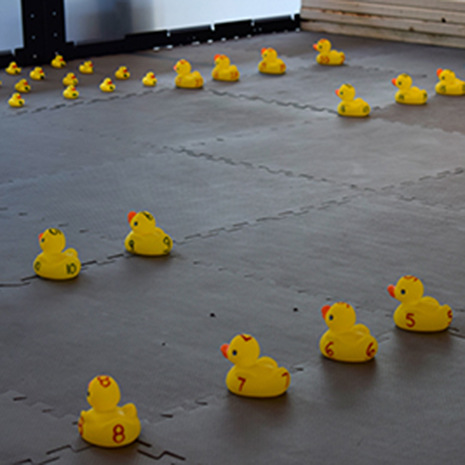