Passing it Forward: How CEC Alumni are Helping the Next Generation Succeed

When Jeff Blohm graduated from the College of Engineering and Computing back in 1997, he probably didn’t know that his career with ExxonMobil would take him around the globe. The mechanical engineering grad has held a variety of technical and managerial positions in both refining and chemicals, living in Louisiana, Texas, Saudi Arabia and Canada, but it’s his work with current CEC students that’s had one of the biggest impacts on his career.

Blohm steps back onto campus almost every fall. He’s doesn’t just return to cheer the Gamecocks on at a football game or to catch up with former classmates during a homecoming tailgate. He spends most of his time at the Gamecocks get Hired! career fair, interviewing and recruiting UofSC students for jobs and internships with ExxonMobil.

“ExxonMobil recruits at several universities throughout the United States that have strong engineering programs and where they have had success historically,” said Blohm. “The University of South Carolina continues to produce candidates that have sound engineering fundamentals, demonstrate strong leadership, and have gained significant relevant experience through internships.”

It’s not just Blohm’s Gamecock background that has him singing the praises of current CEC students. He’s seen firsthand how students from South Carolina can shine if given the right opportunity.

“Several alumni from South Carolina have been very successful at ExxonMobil with several in executive positions and senior technical positions throughout the company and across the globe,” said Blohm. “We have also seen success with our interns and co-ops, with a very high percentage receiving full time offers and even one current student who was selected to attend the ExxonMobil Future Leaders Academy in Houston, Texas this past fall.”

While Blohm might have expertise in the oil industry, he hopes his background won’t stop all students, regardless of their desired profession, from asking him or other graduates for help.

Blohm also emphasized the importance of putting yourself out there and taking advantage of events like the career fair. Students will have that chance on Feb. 18 when more than 250 companies and countless alumni will participate in the next Gamecocks get Hired!  event.

“As alumni, when we come back for a career fair or other activity, we come back first as Gamecocks and secondly as ExxonMobil employees,” he said. “We would love for students to come work for ExxonMobil, but our priority is to help the students, however we can, to be successful in finding a high-quality job with us or one of the many great companies that recruit at South Carolina.”

CEC students might have the support of alumni like Blohm and others, but he does stress the importance of working hard and starting early when it comes to their professional career.

“Most companies are looking for more than just a degree and good grades when they come to a career fair looking for candidates,” he said. “Although grades are important, what separates good candidates from great candidates are the following: demonstrated leadership, relevant experience and community involvement.” 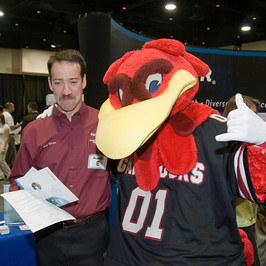 Jeff Blohm comes to the UofSC career fair every fall to give back to his alma mater and help out fellow Gamecocks. Meet great alumni and employers at this semester's career fair!

More information on this event