Chemical Engineering Professor Andreas Heyden of the UofSC College of Engineering and Computing has received a $1 million grant from the U.S. Department of Energy to develop a partial oxidation catalyst based on two-dimension materials for the conversion of methane to liquid methanol. The successful development will result in less waste for oil companies at less detriment to the environment.

Heyden explains that the United States has a great deal of shale oil produced in locations such as Pennsylvania, Texas and North Dakota. When oil is produced, methane gas is released, but there is little use for it due to the lack of gas pipelines in remote locations, and current methods for methane utilization are energy-intensive and only economical at large scales. Without feasible transport options or alternatives for use, the gas is burned, releasing large amounts of carbon dioxide into the environment.

Heyden says, “Whenever you create oil, it comes with methane gas, but you can’t do anything with the methane gas because of the lack of transport options. We hope to create a good use for the high-value methane, without the creation of carbon dioxide.”

This study seeks to develop a method for transforming the methane into a usable resource by generating a catalytic process for the selective partial oxidation of methane to methanol. The study is for three years and will be conducted with partners at the University of Colorado at Boulder and Pajarito Powder, a manufacturer of advanced catalyst materials. Already, Heyden's computational work has identified a potential catalyst, and Pajarito Powder and CU will create the material and test predictions using an oxidation process carried out at low temperatures and moderate pressures.

Ultimately, the researchers hope to develop a method whereby a small facility or truck can travel to oil production facilities and convert methane to a liquid, such as methanol, by using a low-temperature, small-scale conversion that combines the methane with oxygen. The liquid form can then be transported to other locations for chemical use. The result avoids the creation of carbon dioxide, which is detrimental to the environment, but makes use of the high-value methane.

“The result is better for the environment, as less methane is burned," Heyden says. "There is also an economic benefit as oil companies will be able to produce a valuable by-product instead of having to burn the methane, making use of a resource that currently is wasted.” 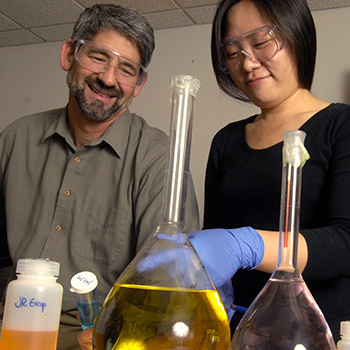 Chemical Engineering Professor John Regalbuto has received a $500,000 grant from the National Science Foundation to continue research that could impact the development of some medicines, such as vaccines. The research is being conducted by the Center for Rational Catalyst Synthesis (CeRCaS), which seeks to streamline catalyst development to make it more efficient for a number of industries.