Huang is the director of the university’s Solid Oxide Fuel Cell SmartState Center and previously worked for Siemens Energy, a solid oxide fuel cell company. According to Huang, rSOC can produce hydrogen at very high electrical efficiency and potentially with low cost. The cells can also reversibly produce electricity and high-quality heat with fossil fuel as the raw material.

“You don't need expensive noble metals, such as platinum, to catalyze the reactions. The kinetics are fast enough at high temperatures so you can use nickel, which is less expensive and eliminates the need of precious metal catalysts,” Huang says.

Through rSOC, one device can split water to produce green hydrogen for a broad range of applications such as fuel cell powered vehicles. Huang intends to help commercialize rSOC technology and expand it to utility markets, such as hybrid power and hydrogen generation with renewable energy. The new materials and knowledge gained from his current project will apply to all types of rSOC systems.

Huang’s research focuses on developing critical materials for high temperature solid oxide electrolyzers. The process uses power and heat to produce hydrogen as the commercial electrolyzer splits water into hydrogen and oxygen using electrical energy through electrolysis. The water is clean and only electrons are needed. Steam methane reforming is currently the most common hydrogen production method, accounting for 95% of the hydrogen produced in the U.S. Natural gas is first transformed into syngas, which is a combination of hydrogen and carbon monoxide. The syngas is then shifted to a mixture of hydrogen and carbon dioxides, from which pure hydrogen is separated for commercial use.

Clean hydrogen is a promising and critical technology, and we're excited to be a part of its scientific understanding and commercial development.

The DOE currently has a goal of achieving one dollar per one kilogram of hydrogen in one decade, known as the 111 Initiative or hydrogen shot. Steam methane reforming currently achieves $1-$2 per kilogram hydrogen, but it emits large amounts of carbon dioxide. For example, one kilogram hydrogen produced emits nine kilograms of carbon dioxide. The DOE’s goal has inspired alternate hydrogen production methods. Water electrolysis uses alkaline water at 60 to 80 degrees Celsius, but it is only 60% efficient and costly at around $6-$7 per kilogram. Another method uses proton exchange membrane electrolyzers, but the 70% efficiency rate and $4-$5 per kilogram cost is still not ideal.

“In the recent bipartisan infrastructure bill, $9 billion was dedicated to creating regional hydrogen hubs. There will also be an additional $1 billion investment in electrolyzing technologies, which indicates the importance of hydrogen to the current administration,” Huang says.

rSOC’s advantage is that high temperature electrolysis has an inherently high efficiency. There is potential for zero carbon emission by electrolyzers, even though there are currently no commercial units for these rSOC. Long-term durability is a key issue since the material tends to degrade faster at higher temperatures. Huang aims to develop stable, critical materials for rSOC to operate for thousands of hours.

“One key to achieve the desirable durability is to lower the rSOC’s operating temperature from current 750 to 600 degrees Celsius,” Huang says. “We are working on the project to develop new oxygen and hydrogen electrode materials to achieve that goal, while still using the benchmark zirconia electrolytes.”

“High performance is great but improving long term stability is most important since the DOE wants to see 1,000-hour testing results. We haven't finalized the best composition for the durability, but several have shown great performance at a lower temperature of 650 degrees Celsius,” Huang says. “We typically observe stable performance within 300 hours, but it starts to decay after that time. We need to understand why it decays and where it comes from before developing a countermeasure to improve the stability.”

Huang is excited to be part of developing a long-lasting hydrogen production technology. Even though his current research will end next September, he hopes to continue the work with future funding opportunities.

“We hope to solve the issue and push the technology into commercial sectors. We're developing clean technology that will benefit humanity and our next generations to help combat global warming and  climate change,” Huang says. “Clean hydrogen is a promising and critical technology, and we're excited to be a part of its scientific understanding and commercial development.” 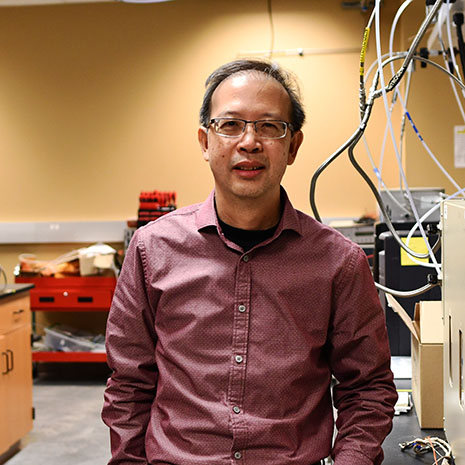 The expertise of chemical engineering professors Sirivatch Shimpalee and John Regalbuto are working together on research to increase ethylene's efficiency and profit.

Read more about the research 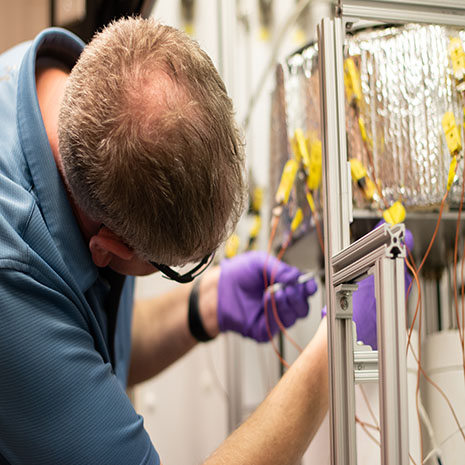 Research at the College of Engineering and Computing and collaborations with statewide power and electric organizations is helping find new solutions using old technologies and storing energy from renewables.