Alaina Coates in the Classroom, Court, and Community

Alaina Coates takes on many roles as a Carolina Gamecock.

This College of Arts and Sciences senior, who is very close to earning a Bachelor of Arts in sociology, recently lead the Lady Gamecock basketball team to their fourth-straight regular season Southeastern Conference (SEC) championship. Her success on the court is remarkable: SEC Freshman of the Year Honors, two all-conference defensive teams as a sophomore and the first of two straight all-SEC first teams as a junior. She is the Gamecocks’ all-time leading defensive rebounder and second in career blocked shots. Alaina led the team to win a record 59 regular-season conference games over four years, and to their first Final Four game in 2015. She was also recently featured by @UofSC Today.

Alaina maintains her dedicated and winning spirit in her community as well. Alaina was selected for the 2016-2017 SEC Community Service Team for her achievements and service outside of sports and academics. She works with young people in the Columbia area, reading and speaking to local elementary schools. She has also volunteered with Meals on Wheels and visits patients and veterans at Dorn VA Hospital. 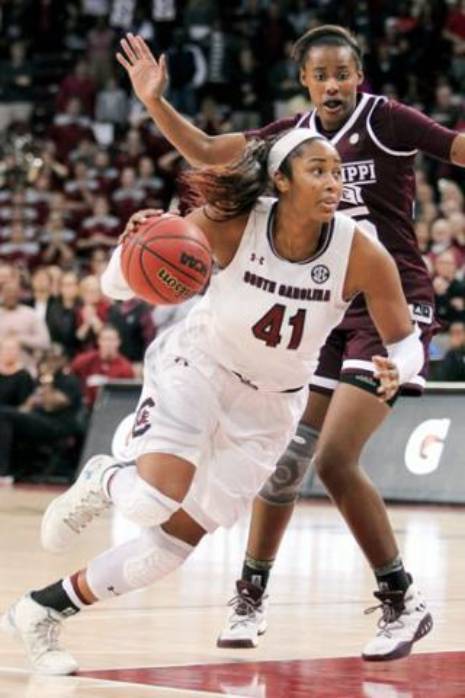 Alaina led the team to win a record 59 regular-season conference games over four years, and to their first Final Four game in 2015.