Dr. Marjorie Spruill’s upcoming book Divided We Stand explores the 1970s divide between feminists and conservatives, and the continued repercussions.

Understanding the roots of present-day women’s rights conflicts requires an examination of the 1970s and brings up names such as Gloria Steinem, Rosalynn

Carter and Betty Ford. Given the current political climate it may come as a surprise that women’s rights were not always such a divisive partisan issue.

In her most recent book Divided We Stand (Bloomsbury 2017), History Professor Marjorie Spruill provides insight into the conflicting women-led movements that divided women’s rights along partisan lines. While the themes of the federally funded National Women’s Conference of 1977 were very much a precursor to the present-day Women’s March, they were largely unopposed until Phyllis Schlafly led a counter rally to oppose the conference in an effort to support what they believed to be pro-family values. “There was this major event in U.S. history in 1977 that totally went by me and apparently is something that people have not remembered very much despite the fact that it got massive media attention at the time,” Dr. Spruill says.

You can learn more about the history of the American women’s rights conflict and read Dr. Spruill’s interview with Smithsonian Magazine.

Dr. Spruill joined the Department of History at the University of South Carolina in 2004, and has spent her career specializing in women’s history and the history of the American South. She is also the author of New Women of the New South: The Leaders of the Woman Suffrage Movement in the Southern States (Oxford University Press).  As a member of the Executive Committee of the Southern Historical Association, president of the Southern Association for Women Historians, and member of the Editorial Board of the Journal of American Studies and the British Association for American Studies, Dr. Spruill maintains an active role in the academic community. 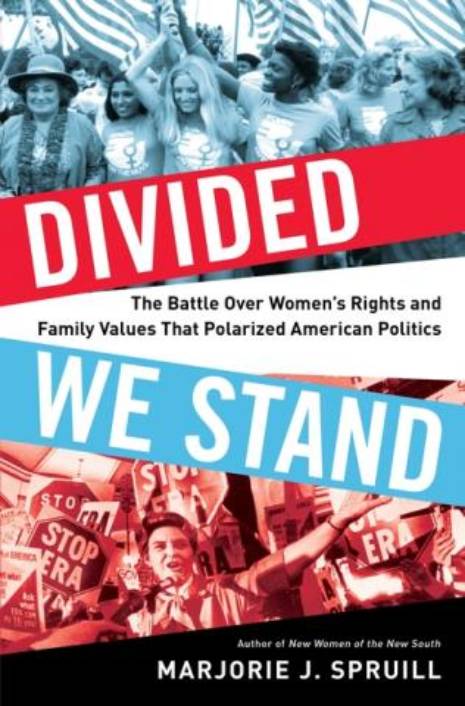 Dr. Marjorie Spruill's upcoming book Divided We Stand explores the 1970s divide between feminists and conservatives, and the continued repercussions.