With unprecedented precision and accuracy, much can be learned about the inner workings of cells at the molecular level thanks to scientist W.E. Moerner’s groundbreaking work in microscopy.

The 2014 Nobel Prize winner and Stanford University chemistry and applied physics professor will discuss the emerging field of super resolution microscopy during a public talk Friday, March 23 at the University of South Carolina.

Timir Datta, professor in the Department of Physics and Astronomy, has known Moerner for more than 30 years. The two share similar research interests, and Moerner hosted Datta when he visited IBM’s Almaden research facilities.

“W.E. is a remarkable scientist who has reinvented himself several times over,” Datta says. “For instance, he has a BS in electrical engineering, MS and Ph.D. in physics and now he is Nobel winning chemistry professor and honorary applied physics faculty member at Stanford. Although many of my other friends from IBM have visited USC in the past, this will be WE's maiden visit to Carolina.”

Moerner’s talk titled “What Can We Learn by Watching Single Molecules? The Promise and Challenges of Super Resolution Microscopy” will be at 6 p.m. in W.W. Hootie Johnson Performance Hall in the Darla Moore School of Business. It is free and open to the public.

In normal microscopes, the wavelength of light limits the level of detail possible to be captured. Moerner and his colleague helped create a method in which fluorescence in individual molecules is steered by light, and a high-resolution image is achieved though combining images in which different molecules are activated. Super-resolution microscopy has made it feasible to study a single molecule with visible light and works well for looking at extremely fragile nano-scale structures.

Moerner’s lecture is sponsored by the Smart State Center for Experimental Nanoscale Physics and is part of the Physics and Astronomy Department’s Richard A. Webb Condensed Matter Symposium Series. 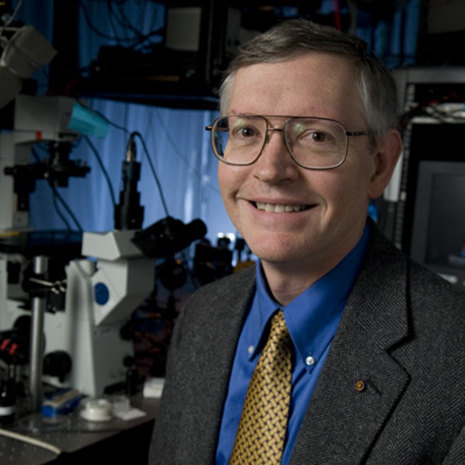 2014 Nobel Prize winner W.E. Moerner helped create a method for examining extremely small structures under the microscope. He will talk about the future of the field during a public lecture at 6 p.m. March 23 at W.W. Hootie Johnson Performance Hall.