Less than two years after discovering the location of an elusive Spanish fort on present-day Parris Island in Beaufort County, South Carolina, archaeologists have begun mapping the area’s complex and vast features to provide insight into over 4,000 years of history in the region.

University of South Carolina archaeologist Chester DePratter and Victor Thompson, an archaeologist from the University of Georgia, in 2016 pinpointed fort San Marcos at Santa Elena, founded in 1577 by Pedro Menedez Marquez, the governor of Spanish La Florida.

Archaeologists began excavating the remains of the Charlesfort and Santa Elena site in 1979, but they have never had a good map of the settlement. In a recent paper published in the journal, “Remote Sensing,” DePratter and Thompson discuss how they used remote sensing technology to map the occupations of the site spanning 4,000 years including those of Native Americans, French, Spanish, plantation owners, Freedmen, and World War I era U.S. Marine Corps.

“By combining traditional shovel testing with remote sensing using radar and other instruments, we are well on the way to constructing a detailed map of the Spanish settlement,” says DePratter who conducts research through the university’s South Carolina Institute of Archaeology and Anthropology (SCIAA) in the College of Arts and Sciences. “It’s critical to gather the data necessary for putting together a comprehensive tool that will help us better understand what happened not only during the Spanish settlement of Santa Elena 450 years ago but throughout history.”

The team’s most recent work provided new insights on the Spanish presence at Santa Elena occurring between 1566 and 1587. During its early years, the settlement went from military outpost to capital of Spanish La Florida, but it was abandoned in 1576 due to a Native American attack. It was reoccupied in 1577 with the construction of fort San Marcos, but a decade later the town was again abandoned. At its peak, Santa Elena covered nearly 15 acres and had about 400 residents.

“It’s critical to gather the data necessary for putting together a comprehensive tool that will help us better understand what happened not only during the Spanish settlement of Santa Elena 450 years ago but throughout history.”

In the summer of 2016 through sponsorship from the Santa Elena Foundation, Thompson and DePratter worked with a University of Georgia archaeology field school to look beneath the surface of the 15-acre site. They sent pulses and electric currents into the ground and measured differences in local magnetic fields in order to map the remains of Santa Elena. They worked to pinpoint locations of some of the lost Spanish buildings, including two missing forts, a church, shops and houses, as well as the town’s streets and plaza.

While the focus of the work was to test the viability of using modern remote sensing methods in conjunction with previous shovel test data, the work also led to important new discoveries, including:

“There are few sites in the country that afford the kind of window into the past, such as we have at Santa Elena,” says Thompson, who directs UGA’s Center for Archaeological Sciences.  “The conditions at Santa Elena were just ideal for this type of remote sensing survey. We simply could not ask for better circumstances.”

DePratter says Santa Elena is the best preserved 16th century town in the country, in part because of its location, which is underneath a former military golf course that has no standing structures on it. Currently, the site is closed to visitors while the Marine Corps finalizes restoration from the recent hurricanes which caused safety hazards from fallen trees. Analysis, assessments, and protection of the resources were necessary before downed trees could be removed. The Marine Corps plans to re-open the site to visitors in the next few months.

No archaeological excavations have been conducted at Santa Elena since 2008, but the mapping project will likely provide the impetus for more detailed work on the site in the coming years.

“Once we have a detailed site map, we can focus on individual structures—a church, a house, a fort—rather than just having to open large excavation units in the hope of finding something interesting,” DePratter says.

“Now that we have collected all the data with three instruments, we will move forward with detailed interpretations of our results to create the final site map,” Thompson says. “Once it is completed, it will be the one of the best and most completely mapped 16th century sites in the United States.”

SCIAA archaeologist Stanley South, who died in 2016, found the remains of Santa Elena in 1979, with DePratter joining the project in 1989. The Charlesfort/Santa Elena National Historic Landmark is located on the Marine Corps Recruit Depot Parris Island. The current remote sensing work is funded by the Santa Elena Foundation and SCIAA’s Archaeological Research Trust and supported by the University of Georgia’s anthropology department. 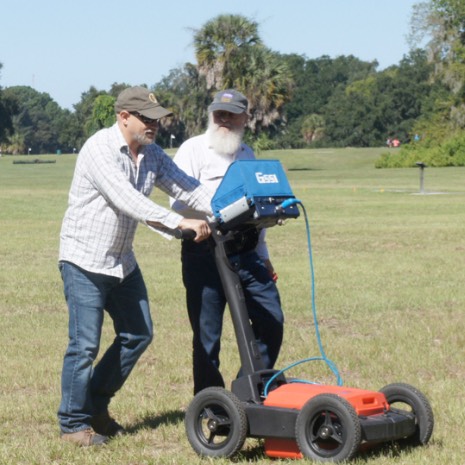 Archaeologist Chester DePratter (right) of the S.C. Institute of Archaeology and Anthropology used remote sensing technology to pinpoint locations of the remains of 16th-century Spanish town Santa Elena including two missing forts, a church, shops and houses, as well as the town’s streets and plaza. He is pictured here conducting field work on Parris Island, South Carolina with University of Georgia archaeologist Victor Thompson.