From metalhead to metal researcher

When Anna Rogers entered her first year of college, she’d never heard of sociology. Her plan was to study psychology, join the FBI and become a criminal profiler.

Three University of South Carolina degrees and nearly a decade later, Rogers now teaches sociology and criminal justice to university students. And she recently published her first book based on the research she did at UofSC.

How did Rogers go from dreams of catching serial killers to teaching young adults about deviant social behavior? Some back story is important.

Rogers grew up in rural Salem, SC, which she says gives even the smallest small towns a run for their money. As the daughter of teenage parents, she was raised knowing the importance of education and hard work.

Her mom eventually went back to school for her master’s and Ph.D., and Rogers wanted to follow in her footprints of being a professor. Valedictorian of her graduating class, Rogers had a full scholarship to Clemson University.

“Growing up in a small town, most families were very into traditional gender norms for women,” Rogers says. “It was not common for anyone to go to a 4-year college, especially girls. But my mother has always been a hardcore feminist. Even when I was very young, she’d talk to me about gender issues and sexism. It was always something in the back of my mind.”

Rogers also spent a lot of time in the record store her father managed. That’s where she discovered her appreciation for hard rock and heavy metal.

“I got the academic background from my mother, but my love of music is all from my father,” Rogers says. “He raised me on metal music, and I’ve been a fan since I was three years old.”

This love of music would lead Rogers on an unexpected academic journey.

In sociology, crime and deviance are popular topics, but I was doing research that was not the norm.

Rogers entered Clemson University as a psychology major with a focus on gender. The first day of classes, she spoke to a professor about wanting to study group behaviors. The professor said it sounded like she was more interested in sociology — the study of human social behavior. That was the first time Rogers had heard the term; her high school had been so small that they didn’t offer sociology courses.

“I went home and did a Google search and pulled up a Wikipedia page on sociology,” Rogers says. “As soon as I read that page, I knew that’s what I wanted to do.”

But after just one year on the campus, she says Clemson wasn’t the right fit. She transferred to UofSC Upstate then to the Columbia campus a year later to pursue gender studies and sociology.

Though her original plan was to be an FBI profiler, Rogers says she realized she wasn’t cut out for the rigorous physical training that was required. But criminology — studying crime and deviant human behavior — was an interest she’d had since childhood.

“As a kid I was very interested in serial killers,” Rogers says. “I would spend the night at my aunt’s house on nights she would watch Unsolved Mysteries. I remember one case struck me about a serial killer who targeted women. I just remember being so young and trying to figure out why anyone would want to hurt innocent women.”

In her undergraduate studies, Rogers combined her interests in gender and pop culture, and in 2012, became the first student to graduate with distinction from UofSC’s sociology program. Her distinction paper — published in the Caravel Undergraduate Research Journal — was about sexism in the lyrics of various kinds of popular music, a trend she noticed after a friend’s mom expressed concern about the heavy metal music Rogers enjoyed.

“That really bothered me,” Rogers says, “because I’d hear the country music lyrics that my friends were listening to, and they were really similar to rap or metal or any of the other genres out there; they just didn’t use the same rhetoric.”

Rogers set out to discover whether metal music was in fact more sexist than other genres, as her friend’s mom had suggested. This question carried her through her master’s and Ph.D. research and eventually became the subject of her book, Doing Gender in Heavy Metal: Perceptions on Women in a Hypermasculine Subculture.

For her research, Rogers selected five musical genres — pop, heavy metal, nu metal, country and hip-hop/R&B. She studied the lyrics of 100 top songs to compare and found that thematically they were very similar and all included sexist lyrics.

Rogers then went into the field to interview metal music fans, and there she experienced gender bias first hand. The fans she attempted to interview at concerts were wary of someone they viewed as an outsider attempting to infiltrate the scene. She realized she needed to stop dressing like a researcher to gain credibility as a metal fan herself and in doing so earned the trust of enough people to be able to continue her work.

Though she was confident in her ability, Rogers worried that her work wouldn’t be marketable to future employers. That’s when her mentor and co-author, sociology professor Mathieu Deflem, stepped in to encourage her research.

“In sociology, crime and deviance are popular topics, but I was doing research that was not the norm,” Rogers says. “Mathieu never had any doubts. He told me if I’m passionate and doing a very good job with my methods, I can study anything I want.”

This encouragement is what kept Rogers at UofSC for her post-graduate work, along with funding from the Russell J. and Dorothy S. Bilinski Dissertation Fellowship program. Deflem also helped Rogers turn all her research into a book. He guided her through the publishing process and contributed some of his own research to create a cohesive piece ready for publishing.

Now in her third year teaching sociology and criminal justice at the University of Georgia, Rogers is using her knowledge of the intersections of gender, pop culture and deviance to impact her community. Last year, she used a service-learning fellowship to create a new class that combines classroom instruction and community engagement. Students will look at infamous court cases and how stereotypes of marginalized groups are used to negatively impact jury verdicts. The service part of the course attempts to give back to victims of abuse, specifically those who are serving life in prison or are on death row.

“I’m talking to some local domestic violence shelters to find out how my students can give back and to break those stereotypes about abuse victims,” Rogers says. "I think it’s going to take a breakdown of stereotypes in the academic part, and I want us to shift that into the community to help break those narratives.” 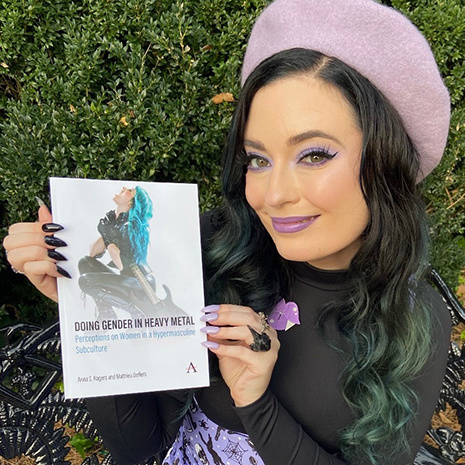 Anna Rogers turned the graduate research she did at UofSC into a published book with the help of UofSC sociology professor and co-author Mathieu Deflem.