The Lost City was dark and quiet.

Stone chimneys and rock formations stretched high off the Atlantic Ocean floor. The network of vents spewed a constant flow of water warmed by the Earth’s mantle. Newly formed organic compounds, forged underground, floated in the current. Bacteria basked in the warm water.

About 2,500 feet above this scene, scientists buzzed around a deep-sea robot on the deck of the Research Vessel Atlantis. They loaded the machine with containers and prepared it for a dive.

After putting her sample containers into place, Jessica Frankle stepped back and took in her surroundings. It was 2018, and she had just graduated from the University of South Carolina. Now she was on the deck of the Research Vessel Atlantis watching as a crane lowered a robot into the ocean.

She surveyed the miles of uninterrupted water, unaware that she was on the cusp of two discoveries.

One was a mysterious amount of a radium isotope in the waters around the Lost City hydrothermal vents — a discovery that could inform theories about the origin of Earth life.

The other discovery would form a new direction for Frankle's own life.

A passion for music and science

“I had a hard time picturing myself as a scientist until that cruise,” Frankle says. Before that, she might have described herself as a science fan, but she was pursuing other interests, too.

During Frankle’s last semester, Susan Lang, then a professor in the School of the Earth, Ocean and Environment, invited her to join a research cruise that fall. The answer was easy.

“Are my parents going to throw a fit if I’m on a boat in the middle of the ocean during hurricane season? Probably,” she says. “Do I want to go? Yes!”

The cruise was a monthlong adventure filled with quite a few sleepless nights as Frankle’s schedule revolved around collecting data and conducting experiments. Scientists from around the world shared the boat and swapped stories about their research.

They worked together to prepare the deep-sea robot to dive and collect samples. When it resurfaced, they swarmed the robot to collect the water samples and prepare them for analysis. They steered around the forecasted paths of distant hurricanes and saw flying fish skip across the peaceful ocean surface. They watched the sun rise and set on the water.

“It was the coolest thing ever,” Frankle says. “I had an absolutely wonderful time.”

That fall, Frankle joined Lang’s lab as a master’s degree student. When they studied the water samples Frankle had collected near the Lost City, they found a surprise: an unusual amount radium-223, an isotope with different chemical properties than standard radium.

“We have a good idea about the different radioactive isotopes in different water bodies, but what we were looking at with Lost City was completely different,” Frankle says. “It had a lot more radium-223 than we expected."

The discovery sparked questions, like why the Lost City vents emitted this variety of radium. Two other USC oceanographers, Billy Moore and Claudia Benitez-Nelson, collaborated with Frankle and Lang to explore that question.

Moore says hydrothermal vents are a relatively recent field of study. They were unknown until the 1970s, when explorers discovered warm water and black plumes of smoke shooting from the seabed. When they found the vents, they were surrounded by clams, shrimp, mollusks and fish.

“People realized that this was a new ecosystem,” Moore says. Scientists named them “black smoker” vents.

The Lost City vents, discovered about two decades ago, do not emit the tell-tale dark clouds. They also produce less acidic water, which allows amino acids and other organic compounds to form. Some scientists suspect Earth life may have spawned from compounds produced in vents like Lost City.

To solve the radium-223 mystery, the research team developed models for the chemistry taking place inside the vents. Understanding the chemical reactions could indicate how long it takes for water to work its way through the vent system.

“The radium isotopes tell you a lot about a time scale when you can't set a timer and watch the water go,” Frankle says.

Their results, published in the Journal of Geophysical Research—Oceans in 2021, showed that the radium isotope resulted from the water spending a relatively short time ― months, rather than years — passing through the hydrothermal vents.

This answered an open question about the vent system and the geologic processes that create organic materials there. It also gives oceanographers a new way to locate more vent systems like Lost City for further study ― by looking for radium-223. 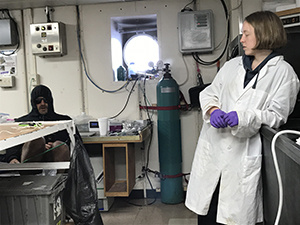 “I’m a chemical oceanographer, but I also dabble in geology, physics and biology. All those things have been really important in my job.”

A career in science

Today, Frankle is a chemist and laboratory manager at Mote Marine Laboratory and Aquarium in Florida.

The nonprofit studies water off the gulf coast of Florida to try answering questions about factors that are making the waters more acidic and red tide.

Frankle’s job includes the occasional week-long research cruise around the Florida coast, so having the Lost City expedition provided vital preparation. Equally important is the mentorship she received from professors and the flexibility to get a broad scientific background in her classes.

“I’m a chemical oceanographer, but I also dabble in geology, physics and biology,” she says. “All those things have been really important in my job.”