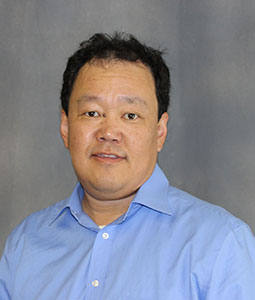 Introduction: The Shimizu group focuses on the designing small molecules and polymers for a variety of supramolecular and molecular machine applications. These include: 1) developing ‘molecular balances’ to study and measure weak non-covalent interactions of aromatic surfaces, 2) molecular rotors, switches, and brakes, and 3) molecularly imprinted polymer (MIP) based sensors and sensor arrays. A common theme in these projects to design systems with unique chemical properties via control over the three dimensional shape of a molecule or polymer.

Project 1. Molecular balances to measure non-covalent interactions of aromatic surfaces. The non-covalent interactions of aromatic surfaces play an important role in biological and synthetic processes such as drug-receptor affinity and asymmetric catalyst selectivity. However, many fundamental aspects of these interactions are not well understood. To address this problem, we have designed a series of molecular devices based on the bicyclic N-arylimide framework (Fig. 1) to measure and study aromatic stacking, CH-π, F-π, cation-π, lone pair-π, and edge-to-face interactions. These ‘molecular balances’ provide a very accurate and sensitive measure of their intramolecular interactions via their influence on the folded-unfolded conformational equilibrium.

Project 2. Molecular devices. In addition to molecular balances, we have designed a number of other molecular devices based on the restricted rotation of the C(aryl)-N(imide) bond. These synthetic systems serve as models for biological molecular machines such as that carry out key functions such as DNA replication, cell division, and cellular motion. The challenge on the molecular-scale is to control and direct kinetic energy and to interface with macro-scale external stimuli. An example of a molecular propeller is shown in Fig. 3. The rate of rotation of the quinoline-succinimide linkage is slow due to sterics. However, addition of acid speeds up the rotation by 7 orders of magnitude as the protons act as "grease" allowing the nitrogen and oxygen groups to more easily slip-by each other. Using similar principles, we have designed molecular brakes, rotors, probes, and reprogrammable molecules and polymers with molecular memory.

Project 3. Molecularly imprinted polymers (MIPs). The molecular imprinting process (Fig. 2) is one of the few methods that can produce synthetic receptors for a specific molecule. MIPs are formed in an efficient one-pot process. Monomers bearing recognition groups are polymerized in the presence of a template molecule. Removal of the template creates binding sites lined with complementary groups. MIPs have applications as synthetic antibodies, catalyst, solid-phase extraction, chiral separations, and sensing. We have developed new imprinting methods that yield more biological-like recognition properties. We have also explored applications of MIPs as versatile and inexpensive components in fluorescent sensor arrays.