To ESPN, and beyond

Alyssa Butterson sits calmly in her seat as a recording device is turned on and placed on the table in front of her. She leans forward, her eyes moving between the recorder and me, waiting for the interview to begin. The first question is asked, though uncharacteristically, she’s the one answering.

“First of all, I’m, like, peeing my pants at this point I’m so excited,” she says. “Just the word ESPN. And me there? I’m overwhelmed with joy.”

Butterson is in a spot she never thought she would be. She is still a student in USC’s School of Journalism and Mass Communications, yet she is flown across the country by ESPN most Mondays. She grabs lunch with Lisa Salters. She chills and watches football games with Mel Kiper.

Her work has almost become casual, normal and routine. Yet when Butterson thinks back to where she was two years ago, she still can’t quite believe that hard work, determination and a single lucky break led her to covering ESPN’s Monday Night Football, one of the most watched sporting events in the country.

Butterson’s ESPN career began with the help of an unlikely person — her family doctor.

“One of her patients was my boss, Jess Kraus, the big dog at ESPN,” Butterson says. “My doctor had said to her, ‘one of my patients does sports at USC, you should look at her videos.’ The next day I got an email from my boss saying, ‘hey, would you like to have a job?’“

The first duty of that job was to help with coverage of the NFL draft in Philadelphia. Butterson had to pay for her own travel, cover her own hotel and piece together enough money to cover her meals. She was paid $8 an hour, but the money didn’t matter. She had her shot — the opportunity of a lifetime — and she was determined to make it work.

Without hesitation, she flew to Philadelphia with her eyes set intently on the glamorous job awaiting her: making the schedules for the talent and managing their day to day activities. In essence, she was a production manager’s assistant.

She didn’t get the opportunity to talk to athletes or step in front of cameras, but the experience was a success. Her boss called her just days after flying back to Columbia and asked if she would have any interest in helping with Monday Night Football.

The deal was the same and so was Butterson’s excitement. She had to cover all of her own expenses, but she now felt like part of the team.

Joining the ESPN team for Mondays was another step toward her dream, but for Butterson, it only added complexity to her life as a student. At the time, she was in the J-school’s senior semester class, which meets Monday through Friday 9 a.m.- 5:30 p.m. Her instructor, Greg Brannon, encouraged her to pursue the opportunity with ESPN but told her she was responsible for whatever work she missed.

“The challenge becomes, you’ve got to do what senior semester is,” Brannon says, something he commonly reiterates to students who have a job and take the class. “You’ve got to report, you’ve got to produce and you have to go out and do long forms. We really don’t make exceptions, which means the student has to figure out how to do what they need to do.”

He says the class supports any student who, like Butterson, receives an opportunity that takes them out of the classroom. And personally, he encourages students to pursue any chance they get at full-time employment.

Butterson said that Brannon was supportive of her throughout the entire process, but that missing class was a challenge. The situation presented many highs and lows, but she found a way to juggle her responsibilities and showed visible growth in the eyes of her professor.

“She has a lot of very positive, strong attributes,” says Brannon. “Sometimes people, when they are talented and do have a strong personality, they don’t necessarily want to accept critique. But she’s done a really good job being willing to say, ‘Hey, I want to get better and here’s where I can get better.’”

It’s an outlook Butterson has taken from the classroom to the sidelines. She’s also brought a can-do attitude, something she used a lot during her first experiences with ESPN.

Her willingness to learn was rewarded with more opportunities. Butterson was thrilled, but with each opportunity came more financial weight. The flights, hotels and meals started adding up and it became obvious that her lifestyle couldn’t sustain itself forever. She didn’t want to quit, but realized soon she’d have no choice.

This was one year ago, and the Monday Night Football season was coming to a close. Butterson had three commitments left with ESPN, but she began feeling nervous about the financial situation she found herself in. And just as these nerves had her contemplating whether she could fulfil her commitments, her boss’s boss sent her an email. He had two questions.

He asked her to come on an extra trip to Nashville for the Tennessee Titans-Miami Dolphins game with all expenses paid and a hefty bonus included. He explained that one of the anchors for the game had come down with a sickness, and they weren’t sure if his voice would be ready for the air.

Butterson didn’t even need to read the explanation for why she was being asked to go. She already knew her answer — yes.

Since receiving that email, Butterson has forged forward in her career to the point where now, nearing graduation, ESPN has left the mic in her hands. They have told her that she has two opportunities with the company, and that it is her choice on which one she wants to pursue.

She doesn’t really want to talk about those positions, though. At least not right away with me. She’s gracious that ESPN has offered her them, and she knows that when she is ready in a few months she will choose what is best for her and her budding career. But right now, with her time at college coming to an end, Butterson can’t help but be nostalgic. She thinks back to the experience that finally made her decision to enter broadcast an easy one – the most important rejection of her life.

Butterson was a part of Capital City Sports, USC’s student-led sports broadcasting service, for her first two years of college. After covering games ranging across many of USC’s club sports, she felt ready to take the next step in the organization. So, she applied for a leadership position but was told she hadn’t receive it.

“That was really the first time in my life — to be honest — that I really, really went for something and I didn’t get it,” says Butterson.

Instead of crushing her, though, the rejection pushed her to work harder. She covered more games for Capital City in the following semester than she ever had before. She began reading the current news every day so that she better understood the larger media landscape and she studied her classwork more thoroughly so that the foundation she was working off of in the organization was even more sound.

“It gave me that lesson in life that one downfall wasn’t going to determine my future,” says Butterson.

And it hasn’t, but the success that came as a result of it has started to.

After telling her story of rejection, Butterson is finally ready to speak about the opportunities in front of her.

During her coverage of the recent NFL Draft, she sat down with ESPN executives. They told her that the company had invested in her and that they hoped she’d stick around. She was offered interviews in the following weeks with multiple ESPN departments and was flown to Bristol, Connecticut, to tour ESPN’s headquarters.  The company has now given her multiple options for employment after graduation.

For now, Butterson is just happy to have the opportunities. She hasn’t made any decisions and knows that whatever she does, she will take one of the options presented to her by the company.

“I don’t care if they sent me to Hawaii or Iceland,” she says.

Butterson has spoken to those close to her about the opportunities, although their words have only echoed what’s going through her mind.

“My advice to her,“ says Brannon, “which really isn’t necessary because she’s already figured it out, is go and do and pursue the things that you think you want to do. And I think what she has found is she absolutely loves it.”

ESPN has rewarded Butterson for her perseverance and dedication. With the opportunity, she hopes to push others to follow in her footsteps and work as hard as they can to accomplish their dreams.

“I hope to be a positive influence,” Butterson says. “I want to have a following that sees that I have come from the bottom to the top. Not this sad story, but that I worked my way to where I am. Anybody can get there with hard work.”

Days after speaking with me, Butterson is seated in the journalism school behind the equipment desk where she works during the week, far from the many sports hubs that house the NFL’s 32 teams. In her hand rests a pencil, and strewn beside her is tomorrow’s homework that she’s working diligently to finish.

Two weeks ago, she was speaking with Antonio Brown during the Steeler’s postgame. Today, though, she is a student. Bristol is far from her mind, and so are the letters E-S-P-N. 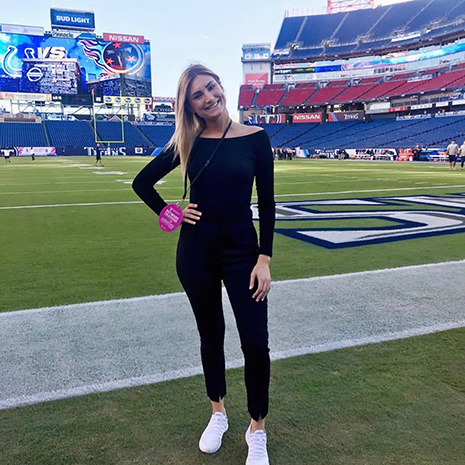 Alyssa Butterson on Nissan Field before the Tennessee Titans faced the Dallas Cowboys.