Posted May 11, 2018
All photos by Allen Wallace with Bifocal Photography

The Mercury Awards are the premier public relations awards in South Carolina, recognizing professional-level work produced during the previous calendar year as judged by a sister chapter of the Public Relations Society of America. This year’s entries were judged by the Arkansas chapter.

Dr. Brooke McKeever, an associate professor in the public relations sequence, was named SCPRSA Educator of the Year. The win came as a surprise to McKeever, who had no idea that her colleagues, instructors Kelly Davis and Ernie Grigg, had nominated her.

“Brooke makes an immediate impression on you when you meet her,” said Davis in her nomination letter. “She is incredibly kind and generous with students and colleagues, always giving of her time and counsel. She is highly regarded as a researcher and leader in the academic circles of public relations, and she has a reputation around our school of encouraging the intellectual growth of undergraduates, graduate students, faculty and staff alike.”

Senior public relations major Jamie O’Keeffe took home the Public Relations Student of the Year Award. O’Keeffe was nominated by Grigg for her work as director of The Carolina Agency.

“Jamie has been instrumental in helping the agency evolve from a loosely organized class into a business,” said Grigg in his nomination letter. “Largely because of her efforts, The Carolina Agency has tripled its billings in just six months. One of my proudest moments was when she asked me to explain budgeting to her. After that day, she has put together all of the budgets and scopes of work as well as managed timesheets — unprompted.”

A multitude of other SJMC students also garnered awards for their creative work.

“We were proud to see the SJMC so well-represented at the Mercury Awards,” said Dr. Tom Reichert, dean of the College of Information and Communications. “We were there at every level, from students, to faculty, to alumni, and that speaks to the quality of our program. You can crow about your program all day, but exceptional programs have the awards to prove it.” 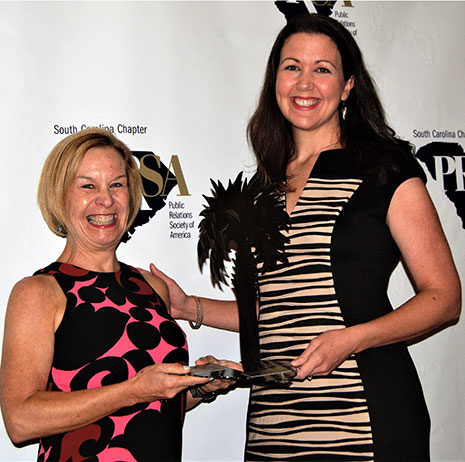 Dr. Brooke McKeever was named PR Educator of the Year at the South Carolina chapter of the Public Relations Society of America Mercury Awards.