Sam Dauchert stood in front of five teams and a hoard of onlookers as a garnet and black race track snaked around his legs and circled the packed room. Dauchert, a doctoral student and the class’ instructor, raised his hands high, motioning three times for the room to quiet down. As raucous laughter shrunk to whispers, he laid out the rules for this year’s annual top gun car race.

Each race would be a bump-style elimination race, he said. A bracket had already been scribbled on a white board at the far end of the room, showing multiple head-to-head races that would eventually end in a single champion. The goal for each team was simple: do not have your car go off the track, and do not let the other car catch up and bump you.

What happened in the next 30 minutes can be described in a single phrase – a whole ‘lotta fun. Win or lose, each of the five teams were just happy to see a semester of hard work, late nights and a lot of failures end in a success.

“Putting the car together and presenting it in front of a group like this, it was nerve-wracking, it was scary, but overall, it was fulfilling,” says Skyler Pittman, a student in the class whose car came in second place. “Even if it went into the wall, just being able to have that type of control over an electric object really made us feel good about ourselves.”

Unlike most laboratory courses in the College of Engineering and Computing, each lab in the real-time systems course focused on a different but related collection of material, and built upon one another. The first lab focused on open-loop control, the second on creating the beginnings of an electrical system, and the third on creating a closed-loop control system that eventually became their car.

“What we did on day one matters on the last day,” says Dauchert, who has taught the class for three semesters. “If their open-loop system doesn’t work, then their closed-loop system won’t work. Essentially, if something breaks from the previous labs, they have to go back and fix that.”

The class was more in-depth and independent than labs earlier in the electrical engineering sequence, which according to Pittman, was “empowering” and has prepared him for next year’s senior design course. “It’s really up to you what you do,” he says. “What we do, we might not have been the smartest group, but we put in the work it took to at least come up with something decent.”

Even for the winning team, nothing came easy. “I found out that I have a love-hate relationship with the material,” says Fletcher Turner, a member of the first-place team. “I really do enjoy when something actually comes together and understanding how it works, but also I hate when it doesn’t work. But, that’s part of it I guess.”

Regardless of how far they advanced on the white board bracket, each team left Wednesday’s event content. Their many hours in the lab had built to all they really wanted: appreciation for their work by friends and professors, and a car that moved. In their eyes, anything on top of that was a victory. 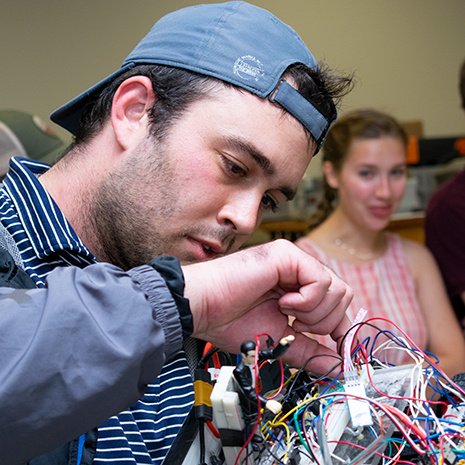 Photos from the event

Do you want to see each of teams, their cars and the event's onlookers?