While the rest of Hunter Damron’s freshman class was orienting themselves with the newfound rigors of university life, he was joining one of the top underwater robotic research teams in the country and beginning work as the primary author on his first research project.

By Damron’s sophomore year, when classmates were beginning to consider study abroad opportunities and the prospect of internships, he was in Spain presenting his research findings at the International Conference on Intelligent Robots and Systems – which is the second largest robotics and automation conference in the world.

“He’s extremely intelligent and he’s hardworking. I mean, you have a smart person that is hard-working, there’s not much more you need than that.”

And now, as a junior, Damron received an honorable mention for the Computer Research Association’s 2020 Undergraduate Researcher Award – which recognizes him as one of the top computer science and engineering undergraduate students in the country. The experiences have prepared him for future doctoral studies, and the recognition confirms the merit of the work he is doing.

“I was really shocked when I heard that I had received this,” says Damron, a computer science and mathematics dual major who was also recently selected for a DAAD RISE Germany internship doing swarm robotics at the University of Lübeck. “It’s good to know that the research I am doing actually is real research; that I’m not just playing some supporting act.”

For Rekleitis, the work Damron has done is unlike what he has seen from any other undergraduate researcher. And while both he and Damron admit that part of Damron’s success was due to the luck of being a primary author on a smaller research project, Rekleitis made one thing clear – Damron’s success should come as no surprise.

“It’s the first experience I have had where a first-year, entering student would work through a whole project and be the primary person on that project,” Rekleitis says. “He’s extremely intelligent and he’s hardworking. I mean, you have a smart person that is hard-working, there’s not much more you need than that.”

Following Damron’s graduation from the University of South Carolina College of Engineering and Computing in May 2021, he hopes to pursue his doctorate in theoretical robotics and focus more on the mathematical side of robotics research. But, for the time being, he is intent on maximizing his undergraduate research experience, knowing that it is preparing him for whatever his future holds.

“I don’t work for the recognition, but it is really rewarding and makes the time worth it,” Damron says as he reflects on receiving an honorable mention from the CRA. “I enjoy doing the work, and the recognition is just an added reward.” 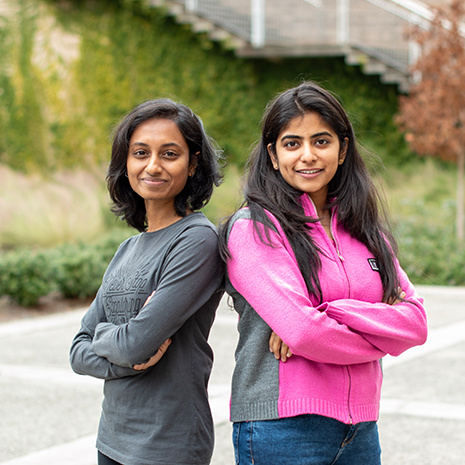 Revathy Venkataramanan, Utkarshani Jaimini and Ananya Banerjee the opportunity to network with and learn from 20 senior female researchers and professionals in the field of computing.

Learn more about their unique opportunity