Sometimes the person you’re looking for is right under your nose or maybe just around the corner. For Phonecia Hughes and Michael Myers, there were so many opportunities for their paths to intersect. But it wasn’t until a normal morning in front of the Swearingen Engineering Center that their love story was set into motion.

“I was getting coffee at the food truck because there was no café then, and I see Phonecia,” said Myers. “She was crossing the street from 300 Main going into Swearingen.”

“No, there was no café in Swearingen then,” said Hughes with a laugh. “We weren’t so lucky.”

This chance encounter would become the first spark between the two electrical engineering majors. The couple would later learn they had a laundry list of connections, including that Hughes’ and Myers’ grandmothers both attended Allen University at the same time, and that Myers’ older brother was a history teacher at Hughes’ middle school. Their parents were even in college together at the same time, but somehow they never connected until Myers decided to offer up some friendly advice.

“I felt like, hey, I am this upperclassman. I have this clout and this aura about me,” said Myers. “So, I walked up to Phonecia and gave her my information. I said you’re going to need help in your classes. I was totally not like the gentleman I am today.”

Hughes thought the gesture was sweet, but the couple didn’t start dating immediately. Fortunately, they found themselves together again in a lab just the next semester.

“We ended up being great colleagues and friends,” said Hughes. “We’d speak in passing and in class. I always sat in the very front of class because I’m short, so I needed to see. Michael always sat in the very back of class, and I had no idea that just walking in there that my husband was literally right behind me. I mean that is just the craziest thing to know that four years went by, and he was around all along.”

Graduation came and went, but there still weren’t wedding bells in the air. Hughes and Myers both started their professional careers and even moved to different cities. Then, a familiar name popped up on Myers’ phone.

“I became a member of my fraternity and Phonecia’s dad was actually a member of the same exact fraternity,” he said. “That’s when she actually sent me a congratulatory text message.”

Myers said a few more months went by until he finally had the nerve to text Hughes again and ask her to grab dinner and drinks while he was in Columbia for work. From there, it didn’t take long for the two to see a future together.

“It was Valentine’s Day,” said Myers. “I want to say that was our first big date because I actually cooked for her.”

“We had shrimp, steak and broccoli,” said Hughes. “I can actually remember that.”

“That was the moment when I was like, OK, I can put my stamp on this because, if she doesn’t like my cooking, this isn’t going anywhere,” said Myers. “Sure enough, everything worked out and that was when we officially started dating on February 21st, 2016.”

Now, Hughes and Myers have just months before they will walk down the aisle in May 2020. It’s been a long journey with the CEC playing a vital role.

The two Young Alumni Board members give credit to the college for part of both of their professional and romantic success.

“Our love didn’t cultivate at Russell House or at a football game,” said Myers. “It cultivated at Swearingen. Here in Swearingen on the second floor in our 301 Lab.” 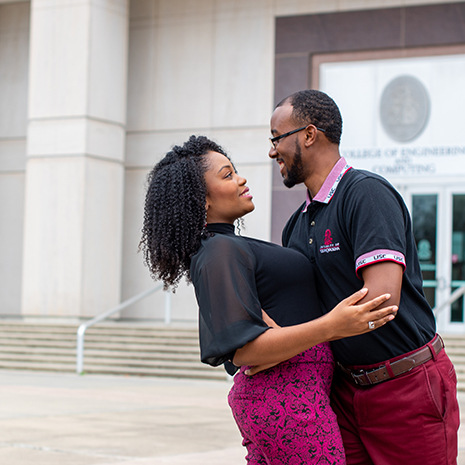 We know that Michael and Phonecia aren't the only couple to find love within the walls of Swearingen! If you did too, we want to hear your love story! Send us a paragraph telling your story with photos. On Valentine's Day, we will share all CEC love stories we receive!

Submit your story to alumni@cec.sc.edu