Civil and Environmental Engineering Associate Professor Dimitris Rizos is working to improve the safety of railways worldwide through a three-year study funded by the Federal Railroad Administration (FRA). The $310,819 grant will develop techniques that use satellite radar imagery and other geospatial data to monitor for precursors to hazardous ground conditions surrounding railway tracks.

Inspection and monitoring are integral to the railway industry for ensuring service continuity and maintaining the safety of operations. For example, proper drainage of the track and stability of slopes in cuts and embankments are critical for preventing settlement and blockage from landslides, mudslides and rockslides, which can lead to derailments. But conventional inspection and monitoring methods, such as Global Positioning System, surveying and visual inspections, can disrupt operations. These methods are deployed infrequently due to high costs and do not provide network-wide monitoring. They also typically do not monitor the rate of change in conditions over time and are not predictive in nature by themselves.

Rizos explains that early detection and improved prediction of the risk potential for landslides and geotechnical failure is now feasible due to affordable satellite imagery, coupled with recent advances in remote sensing, data collection and image analysis algorithms. His interest in the area began about seven years ago when he identified a student who was excited to work with satellites and signal processing. “At that point, we decided to look at railway track and the correlation of signal parameters to physical properties to see how that would allow us to predict change in conditions,” Rizos says.

Rizos’ research team began by working with the FRA and Class I railroads to identify candidate sites for satellite monitoring, such as where railroads have concerns of derailment or right-of-way encroachment due to the stability of the track. They monitored seven sites around the world and classified them based on data for potential events, such as flooding, slope failures and rock falls. Working at a local site, the team conducts ground measurements to investigate how satellite radar data can be used to detect and monitor moisture changes in the railway track and slopes, as well as small and large-scale deformations of the ground surface.

“These measurements will be used to develop a model correlating satellite imagery and other geospatial information to conditions that are considered precursors to ground hazards, such as those that trigger landslides,” Rizos says. “Once we have the model, we will monitor for the development of such conditions over time and make predictions of failure events.”

After the model is developed using data from the first phase of the project, the team will begin the second phase, which will use artificial intelligence (AI) to automate the real-time detection of precursors to ground hazard triggering conditions. The AI system will be trained based on the large dataset collected and implemented in the field. The system will ultimately improve rail safety by detecting failure conditions in a timely manner and facilitating the mitigation of the ground hazard risk.

“As with every research effort that has high visibility and high impact potential, we plan for the big-picture result to be a predictive tool for network-wide monitoring of potential hazards—a tool that will become a cornerstone of future development around the world,” Rizos says.

Rizos is the director of the Railway Engineering Graduate Certificate program. He has been coordinating the railway engineering research and education initiatives since its inception in 2011. His areas of interest are in structural mechanics, dynamics and remote sensing techniques with emphasis on performance assessment of the railway and highway infrastructure. 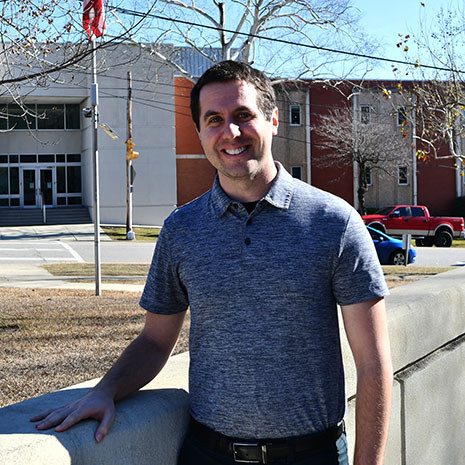 A creative and inquisitive mindset and a passion for research has led alum Benjamin Davis on an entrepreneurial journey. He is currently working on how his smart technology can detect and even predict falls.