Justin Tupper has built his career on golf and creativity. It’s a connection he forged on golf courses in South Carolina’s Lowcountry 30 years ago.

As a teenager, Tupper spent countless hours enjoying the solace and challenge of golf. Whether chipping his way out of a sand trap or concentrating on a putt, he felt energized by the opportunity to meet challenges creatively.

“The game fit my personality of being creative, being outside, not depending on others and figuring it out,” Tupper says. “There’s not just one way to play golf."

Tupper found similar creative freedom when he discovered the media arts major at the University of South Carolina. Before college, he had struggled in school — dyslexia caused him to struggle with timed tests that had hard-and-fast answers. But the chance to tell stories through video felt much like a day on the green.

“I could learn how to capture an image, use light, shoot a video, edit video and tell a story,” Tupper says. “I could do all those things, and there wasn't a right and wrong way. For me that was incredibly liberating and inspiring. I didn't know that an educational experience could be like that.”

From hobby to big business

After graduating in 1999, Tupper sold real estate in the Beaufort, S.C., area for several years and continued to play golf as a hobby. As social media and online video took off, he noticed that a lot of people were making golf tutorial videos that had bad advice and were made poorly. This gave him new business idea that would combine his love for the game with his passion for storytelling.

Through what he calls “dogged determination and persistence,” he connected with golf pros who were willing to share pointers on camera. He produced a series of golf tutorial videos with legends like Cameron McCormick and Andrew Rice. He started a company called Revolution Golf to sell those videos on DVD, until he decided shipping discs was too slow.

“Golfers want good quality golf information, but they want it immediately,” he says. 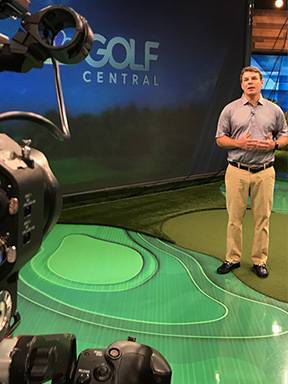 In 2013 Revolution Golf became the first company with a subscription model for streaming golf instruction videos. His conversion rate tripled overnight and he was able to forego the cost of shipping the discs.

“Any person that played golf anywhere in the world could subscribe to Revolution Golf and learn through video from the best instructors in the world,” Tupper says.

The company grew quickly, and other golf media companies started paying attention. In 2016 NBC Universal approached Tupper about acquiring the company and hiring him to continue running it. Tupper, who had been exploring ways to raise capital and expand the business, thought it was another win-win.

“I had this opportunity to sell my business to the largest sports media company in the world and still continue to build it,” he says.

“Five years later, I'm still growing it greater than I ever even imagined. Now we stream more instructional and golf-lifestyle content than anyone in the world. It's been a dream come true.”

Throughout his career Tupper has used the skills he built as a media arts major at USC and as a golf enthusiast. An understanding of production, such as how to light a scene or edit a video, was crucial. But more important was mastering storytelling, which helped him see the big picture of his business.

“The scriptwriting and storytelling classes were tremendous to me as we built a business,” Tupper says. “They helped shape me as a businessperson and as a salesperson.”

“Whether you’re creating a business or selling a product, you want essentially the same thing as you do when you’re writing a great script or screenplay. You want to create emotion.”

As for connecting that love for storytelling to his love for golf, he thinks about the lessons he learned on the links as a teenager ― lessons about creativity, independence and perseverance.

“I truly think the game of golf has provided a framework for me as a businessperson, as a creator and as a human,” he says.