As a first-generation college student at UofSC, Alan Rowland (2021 B.S., Physics) wondered whether he would find a place in academia. But by the end of his freshman year, he was researching the biggest questions about the smallest particles known to science.

It started with a lab class taught by Professor Yordanka Ilieva. After Rowland expressed interest in her research, Ilieva asked him to join her team.

“It felt like I met Willy Wonka,” Rowland says. “I felt like the kid who gets the golden ticket!”

The chocolate factory in his case was the prestigious Jefferson Lab in Newport News, Virginia, where Rowland spent a month running experiments with Ilieva and other scientists.

Ilieva and her research partners, including UofSC faculty Ralf Gothe and Steffen Strauch, study protons by smashing hydrogen atoms with subatomic particles, such as electrons, muons or gamma rays. Ilieva compares this process of discovery to tinkering with a clock to see how it works, by breaking it open to see the gears inside .

“Then you take your hammer and break the gears apart to see how they fit together,” she says. “As physicists we break protons apart using things like electrons as our hammers.”

It takes a high-energy particle accelerator to produce such subatomic “hammers” that can break protons apart. When the protons are hit by an electron, their building blocks — quarks and gluons – typically regroup into new particles, which scatter freely. Physicists use custom-built detectors to track these scattered particles.

“We created tests of the light sensors that help to 'see’ the pieces fly apart,” Rowland says. “It’s kind of like ballistics gel, where we can actually look at particle trajectories through the data the sensors collect.”

Tracking the scattered particles gives physicists insight into the fundamental laws of physics governing the Strong Force, which holds protons and neutrons together in an atom’s nucleus.

Professors Gothe, Ilieva and Strauch lead various experiments to examine the quarks and gluons from protons as well as other particles that result. Supported by the National Science Foundation, the team is working with scientists around the world to discover how the Strong Force works.

“We are doing the experiments that are guiding the theory to a clearer explanation and, ultimately, to a complete and comprehensive theory,” says Gothe.

By understanding the Strong Force, scientists will also come closer to answering one of the biggest fundamental questions of physics: Where does the visible mass in the Universe come from? 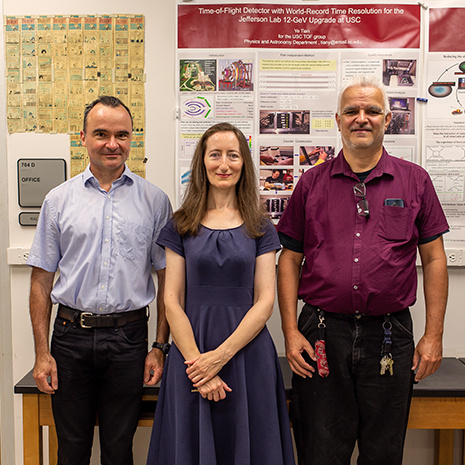 Steffen Strauch, Yordanka Ilieva and Ralf Gothe of the Experimental Nuclear Physics group in the Department of Physics and Astronomy. The group specializes in designing, constructing and testing scintillator detectors for accelerator-based nuclear-physics experiments.

The laboratory on campus was developed by Gothe and has been used to build detectors for the CLAS12 experiment at JLab (under his leadership) and the MUSE experiment at PSI.

Going beyond the basics

Through their work, the UofSC team and other physicists have observed that when it comes to subatomic particles, mass doesn’t behave the way one would expect. The mass of the individual quarks does not add up to the mass of the matter they create.

Their working theory is that the Strong Force creates most of an atom’s mass through the energy holding the quarks together.

The mystery is how energy translates into something you can measure on the scale.

“It’s connected to Einstein’s equation, E = MC²,” says Strauch. “The Strong force is generating an energy field, and that energy field really makes up about 99 percent of the mass.”

Many UofSC students have helped Professors Ilieva, Strauch, and Gothe make progress in this research. Some, like Rowland, have helped test and refine the detectors. Others have traveled with them to the Paul Scherrer Institute in Switzerland to run experiments with their high-performance proton accelerator, the most intense proton beam in the world.

Back at UofSC, still more students analyze the data from the experiments.

“That’s where you can use your classic, high school physics,” Alan Rowland says. “If we know that a particle follows a circular path in a magnetic field, we can calculate the momentum.”

Comparing the data from quarks scattering in real life with the data the theory predicts allows researchers to refine their theory further, with new equations to describe what they observe at the particle accelerators.

Nitin Gupta, a computer science and engineering student, spent the past summer working on computer programs to analyze some of Ilieva’s data. Like Rowland, he learned about Ilieva’s research while taking her class and asked for an opportunity to get involved.

Gupta says he especially benefited from learning how to present his research during the weekly online meetings with students and scientists from other institutions.

“The project has taught me more about what the real world looks like in terms of not only physics but also computing and what is possible,” Gupta says.

Refining and solving the theory that describes the Strong Force is a complex problem that will take the scientific community working together for many years to resolve.

Rowland, who is now pursuing a doctorate in solid state physics at Clemson University, says each student might play only a small role in the larger research, but together they are moving closer to a breakthrough that could revolutionize physics.

“It can take decades for these things to come to life,” he says. “But you’re a single piece of the puzzle, and you do your part.”