Some people have nightmares about setting their own arm on fire.

For Lauren Steimer, it was research.

Steimer is the director of film and media studies at the University of South Carolina and an expert on different methods of stunt work around the world.

She sometimes gets to try her hand at stunting, like when an Irish stunt crew demonstrated a burn by setting her arm on fire.

“It was a tiny bit scary,” Steimer says. “Hearing the sound of the blowtorch coming at my hand was frightening, but the number one rule in the stunt community is to trust your stunt coordinator, and I did. I felt comfortable and safe.”

Steimer’s stunt coordinator that day was Eimear O’Grady, a director of the Stunt School Ireland and founding member of Stunt Guild Ireland. Her credits include Star Wars: Episode VIII, Game of Thrones, Penny Dreadful and Vikings.

Steimer’s research on stunt work has brought her not just to Ireland, but around the world to places including New Zealand, Thailand and, of course, Hollywood. Steimer’s first book, Experts in Action,  examines how global cinema has adopted Hong Kong-influenced aesthetics and stunt techniques.

“It became really common for audiences to expect people to do martial arts on screen,” Steimer says. “People talk about the action, but I wanted to talk about the unsung heroes, the ones who risk their lives, the highly-trained professionals behind the scenes.”

Now at work on her second book, Steimer researches stunt training practices and unions around the world. The COVID-19 pandemic has delayed her travels up to this point, but she plans to include Ireland, Scotland, the United Kingdom, Australia and New Zealand.

A global look at stunt work

When Steimer entered the cinema studies program under early admission at New York University, she was immediately drawn to Hong Kong cinema. It wasn’t just the action that caught her attention, but also the way stunt unions developed differently in Hong Kong versus the U.S., specifically how stunt men and women were able to find work.

Steimer began to focus on the difficulties that stunt women and minorities have faced in the industry. In early cinema in the United States and elsewhere, stunt actors usually broke into the industry through fraternal networking systems like the Stuntman’s Association of Motion Pictures, which was exclusively white and male-dominated.

In places like the United Kingdom, Australia and Ireland, elaborate testing structures help vet stunt workers and, in some ways, even the playing field. New Zealand’s system is similar to the American system of networking and getting by on word-of-mouth recommendations.

But this type of connections-based work has challenges, which are the basis for Steimer’s upcoming book research.

“I am curious to know how people are receiving training,” Steimer says. “What kind of training is available? Who has access? How regular is the training? How expensive is it? Do people from these groups actually end up getting work in their local industries or internationally?”

Forward focused: Away in L.A.

This question of access to stunt training has inspired Steimer to start an “Away in L.A.” summer program with her spouse, Kelly Wolf, also a UofSC film and media studies instructor. The program would allow students to study in Los Angeles to get a closer look at careers in film.

“What we want to do is create a system so that it’s easier for students to succeed,” Steimer says. “You have to create a pathway to a place where there will be jobs for them.”

Steimer and Wolf are collaborating with UofSC alumni who live in the Los Angeles area to help build connections and allow students to network.

“Our students can benefit from important hands-on experience through internships and interact with alumni in various positions in the industry who will provide future students with a network of support and opportunity” Wolf says.

Steimer says the program will be a unique and important opportunity for those students who haven’t traveled extensively to feel more comfortable traveling with the support of their professors and cohort.

There will also be scholarships and grants available to afford the opportunity to underrepresented students. 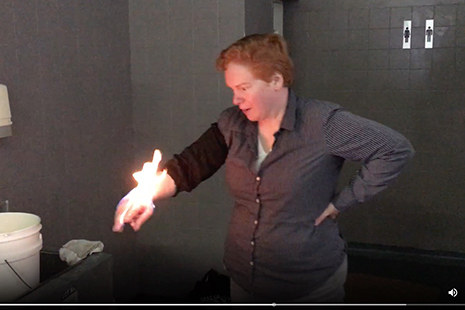 Video description: Lauren Steimer dips her hand and forearm into a bucket of fire-retardant gel. A stunt supervisor then douses Lauren's hand and arm with an accelerant liquid and uses a blowtorch to ignite the liquid. After a few seconds, Lauren dunks her arm into a bucket containing more of the fire-retardant gel, extinguishing the flame. Onlookers cheer from off-camera.