Undergraduate researchers Gigi Jones and Pilar Zamorano are learning how to grow crystals. In a lab at the University of South Carolina, a graduate student guides them through the steps to mix elements, add heat and cool it down just slowly enough to get crystals to form.

Practicing these reactions will teach them the skills they need to do research with chemistry professor Hans-Conrad zur Loye, with the goal of innovating safer ways to store nuclear waste. Although the undergraduates won’t handle radioactive elements, their work will help identify chemical processes that could create new storage structures for nuclear materials.

Their work depends on a partnership with Savannah River National Laboratory (SRNL), located in Aiken, where zur Loye holds a joint appointment and where he sends select graduate students to work on research. While zur Loye and his students work out the chemistry on campus, SRNL is equipped to run the reactions on a larger scale with radioactive elements.

Some of zur Loye’s ongoing research explores how to use these crystals to store parts of nuclear waste from past reserves. Now a team of researchers, which includes Jones and Zamorano, have joined an initiative to greatly reduce the cost and amount of nuclear waste produced in the future.

The initiative aims to support the development of Advance Reactor (AR) technologies to meet future demand for nuclear power in the US. The Department of Energy has funded 11 projects under the Optimizing Nuclear Waste and Advanced Reactor Disposals Systems (ONWARDS) program, and zur Loye’s team is part of a larger collaboration to develop an all-in-one waste form called a cermet.

A composite of ceramic and metal materials, a cermet is a waterproof structure specifically tailored for nuclear waste applications. Cast into long cylinders, it will be able to store radioactive elements safely away from the environment for millennia.

“The goal is that once the waste comes out of one of these Advanced Nuclear Reactors in the future, it will get made into something like this, put into a repository and never seen again,” zur Loye says.

If the initiative succeeds, the payoff will be a significant decrease in the amount of waste generated by future nuclear power plants ― and as a result, a cleaner option to generate power nationwide and a path forward to reduce carbon emissions.

In total, eight institutions are working on the cermet project with Rutgers University as the lead organization. Included are researchers at SRNL, to test how well zur Loye’s ceramic materials hold up against leaching into water over time.

SRNL Fellow Engineer Jake Amoroso will work with zur Loye to measure durability. Amoroso was instrumental in bringing together the group of scientists who will work on parts of the project.

“It came together from all of us knowing each other and having an idea,” Amoroso says. “Partnerships allow us to get exposure beyond our own walls and to bring in new ideas and new thoughts.”

Beyond the innovation that comes when great minds work together, the collaboration between UofSC and SRNL comes with an added benefit: students gain the skills to fill crucial jobs in nuclear materials research.

Travis Deason, a senior scientist at SRNL, became involved in zur Loye’s research on nuclear waste forms in 2019, when zur Loye’s prior graduate student began running experiments at SRNL. This led Deason to enroll as a doctoral student at UofSC as he continues his work at SRNL.

Undergraduate research for the future

Deason never expected to go back to school. After earning his Bachelor of Science from UofSC, he taught and made a career as a chemist. He says this was possible because of his time as an undergraduate researcher, which gave him skills beyond what he would have experienced in a chemistry class alone.

“With undergraduate research, you’re building on what you learned and continuing to change things, and saying, ‘OK, that didn’t work. Let me try something else!’” Deason says.

Just as Deason got his start in chemistry as an undergrad, Gigi Jones and Pilar Zamorano are laying the foundation for their own bright futures through their research. Both say they are eyeing the medical field for future careers, but Jones says her experience so far has begun to open her eyes to additional paths.

“My long-term dream has been to become a doctor,” Jones says. “After doing this research, I am strongly considering going into the research field myself.”

Zamorano knows that pursuing medicine will require a strong scientific background. “Being a part of this research will help me get there,” she says.

Photo on site at the DOE’s Center for Hierarchical Waste Form Materials at the University of South Carolina. From left: Travis Deason, Greg Morrison, Pilar Zamorano and Gigi Jones. 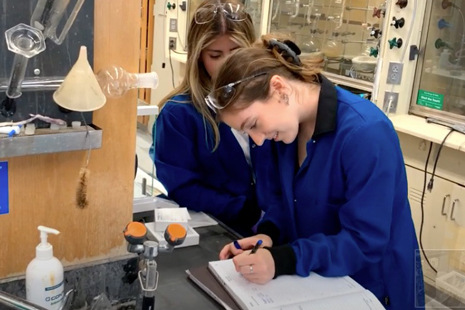 Go Beyond the Classroom

Take a look inside the lab as Gigi Jones shares more about her experience. You can help more students go beyond the classroom by supporting undergraduate research.