When McDonald's wanted to create a new ad campaign, it needed archivist Jessica Farrell to look back through the old.

A degree from the School of Library and Information Science can help you get a job at a university, a library, a government office and  . . . a global restaurant chain?

Alumna Jessica Farrell works as an assistant archivist for McDonald's.  Have you seen the recent viral video "Our Food. Your Questions. Where did the McRib come from?"  That's her.

Farrell's career began in Charleston, where she worked as an archivist for the Avery Research Center for African American History and Culture at the College of Charleston while studying for her Master of Library and Information Science through USC's distance education program.

She moved to Chicago in October 2011 to look for jobs while finishing her degree and "to ensure that gap between graduation and gainful employment was as small as possible," she said.  She had no idea she'd end up working at McDonald's at this point, first taking a job at Armstrong-Johnston, an archive consulting firm.  She assisted the company in a collaboration project with the Johnson Publishing Company's media and photograph archives.  "I applied and interviewed for a lot of jobs before I got good at interviewing and made it to McDonald's in August 2012," she said.  But once Farrell began her job, she was introduced to several new opportunities.

What does Farrell do as an archivist for one of the most famous companies in the world?  A day at work for her is far from that of a "typical" archivist, she explained. "We are closed to the public, so we do all of the work arranging, describing and caring for the historic materials as well as using them for research. In a typical day I spend a lot of time doing research because that is our number one top priority."

Farrell was initially hired for a project to convert McDonald's archives into a Digital Asset Management System, which is a sort of digital library for a company to store and share all of its media and information.  Her technology classes at the School of Library and Information Science helped her not only lead that project, but work toward pioneering a digital preservation program within the company that transitioned existing archives into easy-to-access digital formats.  She now works on several projects each day in addition to her research, she said.  "A couple weeks ago we installed a new exhibit [in the McDonald's Museum], and I have many digital preservation projects going on at once."

The McRib video, according to Farrell, began as part of McDonald's advertising campaign "Our Food. Your Questions."  The ad said that in 1980, McDonald's executives wanted to make a "comfort food" sandwich for customers during the winter months.  Rene Arend, their first Executive Chef, traveled to Charleston, S.C. and ate "a delicious slab of ribs," which inspired the famous sandwich McDonald's currently serves in restaurants worldwide.

The marketing team approached the archivists for information about the McRib sandwich, but they did not know a lot about it.  So Farrell contacted Chef Rene himself, to learn about the sandwich's background. "It was a really cool, really great experience to talk to the first McDonald's executive chef, [because] I see his name and food everywhere," she said.  She took the information back to the agency, and they loved it and asked her to be in the video talking about it.  "It's really uncommon.  It's the only video I've done like that, but I'd love to do it again if I got the chance."

Since it was her first time on camera, Farrell said that she was also "really scared.  I think I didn't quite understand how widely it would be spread.  After the video came out, my friends started to see it on their Facebook feeds.  I'm looking at the YouTube video and it had over 900 thousand views and I'm like '900 thousand people have looked at me? That's so weird.' [The ad agency] did a really good job of it.  They really trust the archivists to provide the truth . . . and it turned out awesome."

Farrell believes that the preservation of a company's history and culture is very important today.  "I was really proud of McDonald's for showing how much they really value their history and taking the time to work on a project like that."

From Farrell's experience at USC, she learned that "library and information science is really a communications field."  At any company, an archivist is really a "heritage communicator." Farrell learned in Dr. Kendra Albright's Issues in Communication in Sub-Saharan Africa class that "library science is a lot about communication."  It's about joining the company present-day with its heritage and the culture it has developed, and sharing that with the customers in an interesting way.  "I love working for McDonald's and doing this," Farrell said. 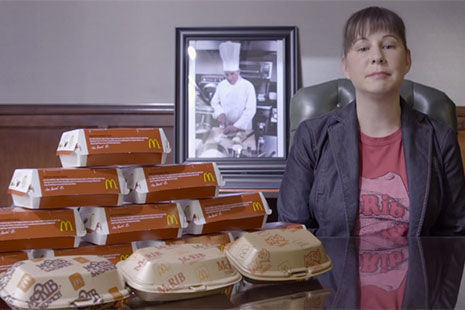 At Work and Play