“I mean, it was really a luck thing,” says Herman Phillips, an Honors College junior. Luck, because he began the summer as an unpaid intern, and film producing is his dream job. But with an award-winning short film of his own, Phillips obviously has worked hard too. I Alone, which he produced and submitted to Campus Movie Fest last semester, involved the work audiences don’t see.

“It’s specifically the logistical, business, legal side of filmmaking, which a lot of people don’t want to do and deal with, but without it there would be no films,” says Phillips, an English/film and media studies double major. “It’s the practical reality that matches the creative side.”

Organization, he says, is his forte. Having only one week to shoot, edit, and submit, while working within the strict guidelines of Campus Movie Fest, honed those skills further. “We did a ton of work on the back end, putting people’s availability into spreadsheets and seeing where it all lined up,” he explains. That allowed him to juggle cast and crew schedules—one of which required 30 people for one scene.

Because many of the cast and crew were USC students, filming during an active school week was even tougher. Phillips confesses to some sneaky entrances into inactive classrooms at night to get the perfect shot. “It was one of the most stressful weeks of my life,” he admits, laughing.

It paid off. I Alone won a Campus Movie Fest Jury Award as well as the Elfenworks Social Justice Award for its poignant meditation on Islamophobia. The film follows a Muslim American student at USC during a day when another public attack claimed by a Muslim extremist fills the news feeds. The story, pitched by USC graduate student Siddharth Pathak, “spoke to all of us and we saw Islamophobia and Muslim discrimination as really something we wanted to tackle and address, because we saw the anti-Muslim effect in this country just kind of growing, especially after the Paris shootings and especially with Donald Trump’s inflammatory language,” he says.

I Alone advanced to the CMF’s next step, the TERMINUS International Film Festival in Atlanta, where it won Best Social Justice Film and a $10,000 grand prize. The biggest perk, though, was I Alone streaming on all Virgin America flights for two months.

“Even though this is just a student film, we’re trying to reach as wide an audience as we have available,” says Phillips, a White Oak native who wants to make it in the big film industry. His goal? Big budget feature length films marketed to the masses. Hollywood is where messages told through America’s most beloved medium will reach the most people.

“Not that I want my films to be didactic, but I want them to speak to social issues or to larger political issues to move our society forward and progress.”

Unpaid and working 18 hours a week, Phillips was another student, doing the compulsory march on the outskirts of his dream job looking for a way in—for four weeks, that is. Delighted by his work, Dick’s producer Amy Ziering approached Phillips the day her executive assistant quit and offered him the job. He started his weekly 50 hours the next day and picked up a check soon after.

“Getting to work for a producer really gives you an inside look on everything that a producer does, which was really great for me, getting to sample that.”

One of the highlights was observing the 2016 Emmy nomination process for The Hunting Grounds. “It was really great to see,” he says, beaming. “Even though they [Kirby and Ziering] are independent filmmakers, they still very much have an influence and presence in industrial Hollywood filmmaking.”

Phillips’ newest film project, Exit Night, is currently in the planning stages and can be found on Kickstarter. “It’s a coming of age story, but it’s a bit more of a darker, realistic take on what it means to grow up in this modern age, while also focusing quite a bit on issues of identity and sexual orientation and gender fluidity.”

A Magellan Scholar, Phillips also is conducting research on the new medium of virtual reality and how it’s changing the Hollywood business model. He’ll have the opportunity to do hands-on research when he returns to L.A. this summer. His first aim is for an HBO internship, but he has options, including working again with Dick and Ziering.

He’s keeping his options open after graduation as well. Graduate school in film and media studies, law school, or business school are his thoughts now. He also could continue in the film industry.

“I’m leaning towards just going straight into the industry, but also maybe my MBA or something – we’ll see.”

Find I Alone streaming on the University of South Carolina section of the Campus Movie Fest website. 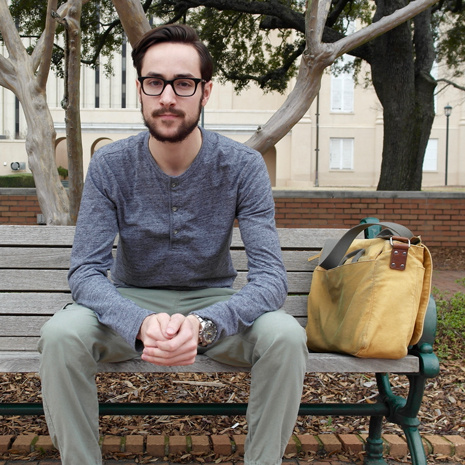