The Making of a Future Lawyer

To the uninitiated, the world of law is one of drama and performance. Steely-eyed showdowns, televisual power struggles, and a dark-suited, emotional Tom Cruise all come to mind. It began this way for Nicole Wittstein, ’17 BARSC, but things changed during her journey that will end, or begin again, at Duke University School of Law this fall.

“I started acting when I was five and did it all the way through high school,” says Wittstein, who grew up in Trumbull, Conn. “After my sophomore year, that was when I first started thinking I was going to take my interests in one area and incorporate them into the performance aspect of being in law.”

The turning point came one summer at Georgetown University, where she learned the basics of law and was introduced to mock trial, a program in which students simulate the events of a trial to prepare for the real-world deal. Wittstein recently concluded her second year as president of the University of South Carolina Mock Trial club, where she held a leadership position since her freshman year.

For Wittstein, the mock trial experience was invaluable.

“Even aside from just learning how to speak well, you learn the law, you learn the rules of evidence, you learn how to think about the law and put together a case theory in the way that people who don’t do mock trial in undergrad simply don’t get the opportunity to before law school,” she says. “I loved my team, I loved this program.”

Her experience with the Honors BARSC program has been equally fundamental. Highly selective, it allows students to design their own degrees. Wittstein graduated with a BARSC in legal advocacy and jurisprudence.

“It basically just gave me a lot of freedom to take a lot of the smaller, independent Honors College courses that are offered that help you with law,” she explains, noting that these varied, intensive courses deepened her interest in law beyond its surface-level drama. One of her favorites exclusively focused on the Fourteenth Amendment, taught by Columbia lawyers Graham Newman and Alex Postic just as the same-sex marriage case rose to debate in the Supreme Court in spring 2015.

Another notable course was Philosophy of Crime and Justice. Taught by distinguished philosophy professor Christopher Tollefsen, it offered the Honors College’s trademark classroom setting—intimate and discussion-based.

“Through being here, and through my academic program, I don’t even know that I necessarily want to do trial work anymore,” Wittstein observes. “I’ve pretty much just fallen in love with the law from there.”

Wittstein’s passion lies in constitutional law, which aims to ensure the rights guaranteed in the Constitution are upheld and protected. “So it’s all those issues—first amendment, free speech, freedom of religion—that really stir my fire.”

For now, Wittstein has high praise for BNTD, LLC, the Columbia law firm where she worked between classes and is working this summer. John Delgado, USC Law ’75, is Wittstein’s boss. An established criminal defense attorney, Delgado handles cases involving murder and large drug conspiracies. Wittstein, who preps witnesses and occasionally visits jail, admits the heavy cases can be trying. “It was hard to go to class afterwards, and think, ‘Right, I’m still a college student.’”

Delgado’s latest challenge was a habeas appeal to commute a death sentence—the last round of appeal possible. As difficult as the job can be, working with their plaintiff was “an unbelievably rewarding experience.”

“If you see something that you want, go get it,” she advises. “I know that probably sounds really cheesy, but you can’t just sit around and wait for things to happen to you, or fall into the right place. With my job I literally just emailed the administrative partner at the firm and said, ‘Hi, I’m Nicole, and I would like to work here,’ and here I am. Don’t let anyone intimidate you.”

After law school Wittstein plans to stay in the Carolinas, where extreme political divisions offer plenty of opportunity to work for what she believes in. There might be something political for her in the future, she hints, but for now, she’s concentrating on how to succeed in her first year at a top law school. 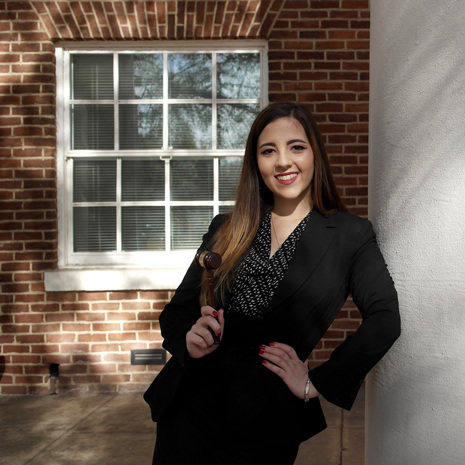