A secret can be a bothersome thing. For Rachel Moyle Beanland, ’03 public relations and art history, an old family secret nagged at her until she finally wrestled it down in a novel. It took imagining her grandmother as a precocious little girl, her great-grandmother as a perplexed young mother, and her great-great-grandmother as a stoic middle-aged woman to help put her thoughts at rest. She also had to re-create the tragedy behind the secret — her grandmother’s anguished memory of watching her young aunt’s lifeless body being brought to shore in Atlantic City, New Jersey. The sight of her aunt's red bathing cap on that tragic day was something she never forgot.

That red bathing cap -- and suit -- is prominent on the cover of Florence Adler Swims Forever, published last summer by Simon & Schuster. Beanland’s debut novel, it was the Barnes & Noble Book Club Pick for July 2020.

“I just had this faith it would be a book,” says Beanland, who has three children with her husband, Kevin Beanland, a math professor at Washington and Lee University.

To accomplish her task, Beanland wrote every day for two years, from 4:30 -7 a.m., before heading to her full-time job at the Visual Arts Center of Richmond. She juggled those responsibilities while working on an MFA in creative writing at Virginia Commonwealth University. Her novel was her master’s thesis.

“Anyone who has three kids and has a dream of doing anything for themselves personally, along with working, there’s something outlandish in that,” she says. “I had an unfounded belief that I could do it, but I needed the hours. And I would track my time with a calculator.”

Beanland’s novel is about the decision her great-great-grandmother made in 1929 to keep her younger daughter’s drowning a secret from her older daughter. Why? The older daughter — named Fannie in the book — is on bedrest at the local hospital expecting her third child. Her second child, a son, was born prematurely the year before and died. The great-great-grandmother, Esther, is determined to keep Fannie from learning her sister Florence has died to help ensure a safe delivery for the new baby. Because Florence, a champion swimmer planning to swim the English Channel, drowns in June in Atlantic City, the secret is difficult to keep. The nurses on Fannie’s hospital ward have to keep newspapers away from their patient, who is moved into a private room to help them keep her from finding out. Gussie, Fannie’s 7-year-old daughter, watches the lifeguards bring Florence’s body to shore, where they labor to revive her before accepting it’s too late.

It was the secret itself that fascinated Beanland. She frequently asked her mother questions about it.

“When I was listening to the story, especially as a teenager — you know teenagers think they’re always right — I would think it is so obvious they should have told my great-grandmother,” Beanland says. “It wasn’t their secret to keep, and she might have just wanted to know.

“As I got older and as I was writing the book, I had much more sympathy for Esther,” she says. “I don’t know if that’s because I was in her character so much or because I’m a mom, but I wrote the book and I still don’t have an easy answer for what she should or shouldn’t have done. That’s what great fiction does — it leaves us puzzling over something.”

To transform a true family secret into fiction, Beanland gave each character a big personal secret, even 7-year-old Gussie, to weigh upon them. She also moved the story from 1929 to 1934 so Hitler’s rise in Europe would cast a shadow over the mostly Jewish characters. She credits her research-heavy career in the Honors College with her ability to describe Atlantic City in that time period, from the novel baby incubators on display on the boardwalk to the grand Hygeia Baths, the indoor pool where her great-aunt may have learned to swim, a rarity for women in that era.

Popping up in the book are the famous Dionne quintuplets, the first set of quints to survive. Born in the spring of 1934, their health and activities were reported daily by the New York Times, which Beanland read to familiarize herself with the time period. With the safe birth of a new baby as the purpose of the secret, the coverage of those world-famous babies would have interested Fannie, who — in her comfortable, private room — was literally and figuratively in the dark about her sister’s death.

Because Beanland’s great-great-aunt, Florence Lowenthal, died at age 19, Beanland didn’t have much to work with in terms of her title character. She sprinkled bits of her historical research into her big imaginings of family members who kept the secret of her death. Along with sympathizing with fictional characters, readers learn a few things about that place and time, including what American Jews had to do to bring family members from Europe, the Florida land boom and bust, and life in Atlantic City during its heyday.

The success of Florence Adler Swims Forever has allowed Beanland to write full time. She won’t divulge what she’s writing now but says her art history major and other honors courses may serve her well in future novels.

“As a writer, you really want to have other knowledge areas, outside of just knowing how to write,” says Beanland, who points to Walter Liniger’s “Echoes in Blues” course and Jim Burns’ African American literature course as examples of classes that exposed her to new streams of thought. “When you read widely, there’s more to write about.”

For Beanland, writing about her family decades before she came along brought about a new secret. When her editor called her in March with the news that Barnes & Noble had chosen it for its Book Club Pick, she was told she couldn’t tell anyone. That was a much happier secret to keep. 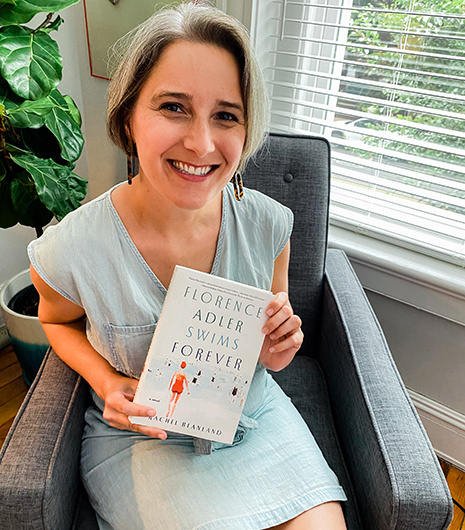 Florence Adler does seem to be swimming forever, at least if you consider its reach. The book has sold to publishing houses in the UK, Russia, Lithuania and France. Other accolades include:

While at the Honors College, Beanland was named named a Truman Scholar finalist and a finalist for Outstanding Woman of the Year in 2002, and she was in the second class (1999) of McNair Scholars, which she says continues to have a profound impact on her life.

A military child who grew up around the world, Beanland’s South Carolina connection stems from her father and grandfather, both UofSC alumni. She has lived in Richmond, Virginia, since 2007.