In the maelstrom of 2020, here stands Taylor Wright. Here in Columbia, that is, with Mayor Steve Benjamin at his side. For Wright, ’19 public health, working as Benjamin’s special assistant has brought exciting opportunities and up-close encounters with all kinds of people. And situations.

“I never thought I would see protests in all 50 states of the union,” he said in late June, after a peaceful march in Columbia to honor George Floyd erupted into a riot hours later. “My worry was we were becoming so numb and complacent to these once-a-year, or once-every-other-year incidents of Black people being killed. It was a big frustration for me.”

Having participated in the protest that morning, Wright was concerned to see how the event became violent that afternoon. Watching on social media and television, he monitored how his boss dealt with the problem — imposing a curfew and famously telling out of town disrupters to “take your *sses back home.”

And then Wright and Benjamin, both Black, both former University of South Carolina student body presidents, put their heads together. What needed to happen, they agreed, was for those unhappy, frustrated people to be heard — and to have a safe space to express themselves. They understood all too well the building emotion of the times.

“I’m so profoundly affected and people of color are, but nothing seemed to be happening, nothing was moving,” Wright says, describing how sickened he was by the video of Ahmaud Arbery being chased and killed by two white men while jogging down an open road in South Georgia.

A runner himself, Wright chooses his well-lighted routes carefully, never wearing all black, always wearing something with “University of South Carolina” on it and headphones to signify he’s exercising. It’s a “weird worry” he experiences every time he gets ready to go.

“Ahmaud began his jog on February 23rd, probably doing many of the preparations that I do, but it wasn’t enough,” Wright wrote in a May 8 essay for Medium.com, a social journalism publisher. “To his murderers, his bright shirt and cautious movements were not sufficient; they saw him as a threat and decided to take action.”

In the essay, “The Dangers of [Insert Activity] While Black in America,” Wright recalls how, as a 14-year-old, he “obsessively” followed the Trayvon Martin case. “As a black man, it feels dangerous to wear a hoodie in America,” he wrote, before continuing about two other cases near his hometown of Goose Creek, South Carolina.

Walter Scott, a Black man, was stopped by a white police officer in North Charleston for having a broken taillight. When Scott ran, the officer shot him multiple times, killing him. That April 2015 incident was followed in June by the killing of the Emmanuel Nine by a white supremacist in Charleston.

Wright had his own scare. As a new driver, with his mother in the passenger seat, he eased the car away from his grandmother’s home in downtown Charleston one night. Pulled over by a white police officer, he listened anxiously to his mother’s instructions.

“That’s when we had some sort of talk about what to do when you’re in a car," Wright says. "She said, ‘Turn the lights on. Keep your hands on the steering wheel.’ I was so nervous she talked for me. I think her taillight was out.”

While the incident ended well — the officer was kind and gave him a warning — such intrinsic anxiety doesn’t dissolve easily. As least not for Wright.

“Even though I work for a city and a mayor who leads a diverse police department, as a Black man I am still very aware of my presence around officers,” he says.

The day after the Columbia riot, Benjamin and Wright met with protest leaders to assure them city government is not their enemy and that they would create concrete, non-violent improvements for minority citizens. A few days later they formed the Commission on the Future of Columbia, a committee of 29 diverse residents representing all ZIP codes, ages, and income and education levels. Protest, non-profit, faith and business leaders, and city employees are among its members. Meeting virtually, the group is examining criminal justice reform, affordable housing, food security, and other issues.

“The goal is to look at how the city can be more equitable across the board and come up with recommendations for City Council,” Wright says.

After the first meeting in October, he was struck by how much the members had in common.

“People just don’t feel they have access to city government and making substantial policy changes,” he says. “But having everyone on that same Zoom was helpful to see different perspectives. It’s hard to see when you’re only at City Hall or if you’re never at City Hall.”

Wright also is helping with the city’s new guaranteed income pilot program, which seeks to lessen poverty and inequality by giving money directly to people with no strings attached. When people have money for necessities like health care, food and utilities, they are better able to pursue education, transportation to work, and other things that help them advance.

In Columbia, private donations will allow 100 fathers from low-income neighborhoods to receive $500 per month for two years. Recipients are members of the Midlands Fatherhood Coalition, making Columbia’s program a counterpart to the program in Jackson, Mississippi, where single mothers have been chosen to receive the funds. In all programs, there is a control group of others not getting the money, so program managers can track how much difference the gift makes.

From South Carolina to City of Columbia

As the mayor’s assistant, Wright’s duties are often behind the scenes. He sees himself as a facilitator, a bridge connecting city government to citizens, and members of one committee to those of another. Fortunately, that’s something he considers his leading talent, honed during his time in student government at South Carolina.

“I’d be in a meeting at the university and the idea being discussed was being worked on somewhere else. I’d be thinking, ‘how do you get these groups together on a small and large scale, to get people talking to each other?’” Wright says. “Being in those silos, you can have your head down working and not look up to see who else is doing similar work. When you connect organizations and people and ideas together, the collaboration increases the impact.”

Certain he’d be in Columbia four years max, Wright was equally determined to get involved in campus life. Between student government and volunteering for flood relief in 2015, he found himself falling in love with the city. His networking brought him in contact with Benjamin, who offered him a job as his special assistant his senior year. For Wright, who’d realized a year earlier that his original plan – medical school – wasn’t exciting him the way he thought, the opportunity intrigued him from the start.

“One of the reasons I wanted to go into local government is it feels you can make an impact,” he said. “As a 22-year-old, you wouldn’t at the state or federal level. Being able to talk to the mayor every day has been cool.”

“I’d get questions about ‘how does a public health major fit into city government?’ he says. “It was a perfect time to be embedded in government, to see how it worked and help with what I’ve learned and to advise and guide as well as I can.”

“In every room I’m in I’m the youngest and most inexperienced just about always,” Wright says. “I learned how to be in a room with people who are smarter than you and how to hold your own.”

Dealing with the fast changes the pandemic brought has challenged Wright to move faster as a person. He has Benjamin for inspiration.

“He’s not afraid to take a chance,” Wright says. “One of the most rewarding things I’m learning is to not have everything figured out and to just go for it. It’s necessary for change, with a pandemic or national movement. If you have to think everything through you won’t get anything done much. You have to move quickly when there’s no playbook.” 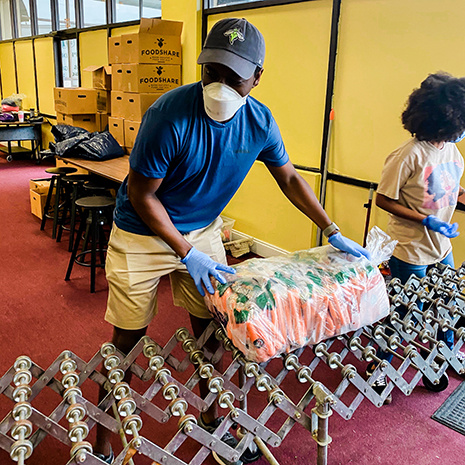 As the mayor’s assistant, Wright’s duties are often behind the scenes.

He sees himself as a facilitator, a bridge connecting city government to citizens, and members of one committee to those of another.