Our next ‘Greatest Generation’

For Dr. Charles Hood, submarines have always been fascinating. And not just because his older brother, Frank, was an officer on one.

“They’re so mysterious and there’s so little written about them,” said Hood, SCHC ’83 chemistry, ’87 medicine. Fifteen years younger than Frank, Charles had often asked him questions about life on the USS Seahorse. But always, Frank came back with the same response: “I can neither confirm nor deny.”

That’s the standard response for American submariners, who sign lifetime agreements never to reveal classified mission details. But in 2016, Frank started talking. He did when he realized Charles wasn’t interested in top secret missions, espionage, or warfare. He just wanted to know what life was like on a submarine. And what it’s like is pretty darn interesting – and funny, and frightening, and exciting. Frank’s stories were so riveting they decided to write a book about his experiences. Using Frank’s sharp recall and Charles’ superb writing, the brothers got to work immediately. The result is Poopie Suits & Cowboy Boots: Tales of a Submarine Officer During the Height of the Cold War.

Released in 2017 and now in its fourth edition, Poopie Suits includes not only Frank Hood’s coming-of-age story during the Vietnam era but also more than 100 archival photos, a glossary of submariner terms, and 13 accompanying essays by Charles about important milestones in American submarine history. The book has been so successful it has spawned two follow-ups: Sub Tales: Stories that Seldom Surface (Dec. 2019); and The Silent Service Speaks (June 2020), a collection of stories written by submarine veterans Charles edited. In 2021 a sequel to Sub Tales will be published. So will volume 2 of The Silent Service Speaks.

Why such an outpouring?

Three reasons: The submariners were ready to talk, they had plenty to say, and they didn’t want to leave this earth without leaving a record of what they’d done, what they sacrificed.

“The men who served on subs during the Cold War are our next Greatest Generation,” Charles said. “They’re starting to sense their mortality. I think the men wanted to tell their stories and would like their kids and grandkids to know what they were doing, at least the parts they can tell.”

Because it’s a felony to discuss mission details, submariners have been called “The Silent Service.” Over the decades, they’ve been a tight-lipped group. But the Hoods’ approach worked. “As we phrase it, we want to talk about the day-to-day and not the cloak-and-dagger,” Charles said. “You can talk about the boats, the equipment, the places you visited, the people you worked with, the ethos of the system, the food – there’s so much to discuss.”

For instance, a chapter titled simply “Rickover” describes the legendary “Father of the Nuclear Navy,” Hyman G. Rickover. Like many submariners, Frank Hood had to endure a personal interview by the famously fierce vice admiral before being approved to serve. In another chapter, “A Wife’s Recollections,” Sharon Hood recalls the loneliness of being without Frank for months at a time, and how Russian spies would telephone their apartment trying to reach him while he was on patrol.

“I got an email from the wife of a submarine vet who wrote that her husband enjoyed our books and is ‘opening up and telling me things he never told me before,’” Charles said. “What these books have done is give people permission to talk. You can share a lot of details without violating your confidentiality agreement.”

Their collaboration also has brought the brothers closer together. Frank, a retired nuclear engineer in New Hampshire, and Charles, a hospital radiologist living in Irmo, talk or email every day. Their first book was written much in that way, with Frank dictating his memories and emailing them to Charles, who put them in narrative form and researched facts. When Charles returned his work to Frank, Frank often remembered more experiences to include. “Organic” is Charles’ word for their process.

Coming up with a title also came about organically. Charles was walking his dog when the rhyming “Poopie Suits & Cowboy Boots” came to him. Poopie suits are the standard-issue coveralls submariners wear. Unlaced cowboy boots, kept at the foot of their beds, are easy to get into when they have to get to their duty stations fast. “Plus there was a little bit of machismo rolled into that choice,” Charles said. “Submarine vets know immediately what the title means, whereas most civilians have no clue – but they are intrigued.”

Charles and Frank also gathered stories of other submariners through many talks the two have made about their books and through their Facebook page, which has more than 4,000 followers. Both information repository and anecdotal clearinghouse, the Facebook page has brought them more stories to tell as well as veterans to write them. The second book, Sub Tales, is a collection of short stories from the annals of submarine history, written by the pair using tips from their readers and Facebook followers.  “You’re the Poopie Suits guys!” is how they’re often greeted when they make talks to submarine veteran groups. They were scheduled to make the keynote address at this year’s convention of the United States Submarine Veterans, Inc., in Tucson, before the coronavirus pandemic postponed it until 2021.

The Hoods have formed a close relationship with the USSVI. They give all proceeds from book sales to its Scholarship Fund. Their original goal was $1,000, but with about 100 books selling per week and to every continent but Antarctica, they’ve upped their goal to $50,000. To date, they’ve contributed $34,000, making them its biggest donors in 2018 and 2019. The scholarships, $500 each, are awarded to children and grandchildren of submarine veterans. They’ve been able to contribute that much because they self-publish. Had they gone the traditional publishing route, percentages of profits would have paid an agent and publisher before the authors.

But there are rewards other than money. For Charles, who already has published two books of family and regional history with another brother and has written three more personal memoirs he hasn’t tried to publish, a big gratification is learning from men who’ve defended the United States with such little fanfare. He’s talked to veterans who served on the USS Nautilus, the country’s first nuclear submarine (1952) and the chaplain aboard the USS Skate, the first submarine to reach the North Pole (1959). And he’s met men on the revered USS Triton, the first submarine to circumnavigate the world submerged (1960).

“I’ve met captains, cooks, sonarmen, torpedomen, machinist mates and nuclear operators,” he said. “I am always struck by their common attributes of quick wit, straight talk, unshakeable patriotism and camaraderie. I think we should stop and think about those men and women serving today, risking their lives, and getting absolutely no attention by design.”

The other day he heard from a 90-year-old veteran in Oregon who’d written a piece for The Silent Service Speaks. “He was so excited to see his story,” Charles said. “He said, ‘I can’t wait to read this book to my grandson.’ So that’s kind of cool.” 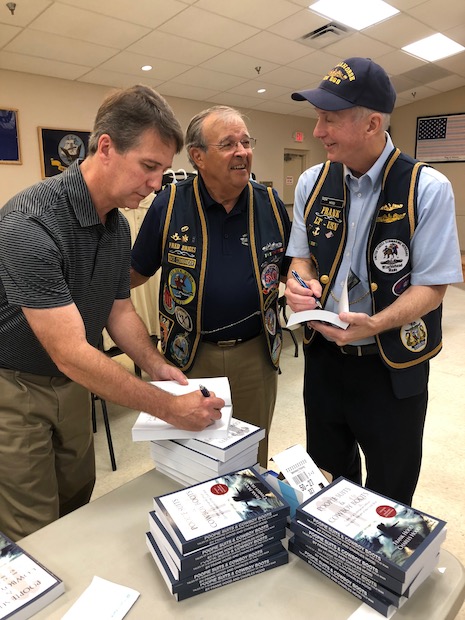 At a recent book signing, Dr. Charles Hood, Fred Briggs and Frank Hood enjoy reminiscing over their tales of the sea. Fred Briggs is the base commander of the Seadragon Base of the USSVI at The Villages in Florida.

Like his wife, Dr. Anita Shah Hood, and their son, Dr. Michael Hood, Dr. Charles Hood was a Carolina Scholar in the South Carolina Honors College. He also was a National Merit Scholar and Who’s Who Scholar.

For him, learning and translating “Navy-speak” into books about submarine history is similar to his work as a radiologist.

“I have to look at sometimes thousands of images on a single patient exam and then distill my impressions into a succinct and logical narrative – i.e., the official radiology report,” he said. “Since radiologists interface with physicians of every specialty, I have to know the vernacular for every field, be it gynecology, neurology, pediatrics, or surgery. Failure to use the proper terms to describe a finding does little to engender any trust in the veracity of the report. Thus, in my “day job” I am immersed in the nuances of language and the importance of choosing my words carefully. I find this knack to translate quite well to my passion for writing about subjects entirely unrelated to radiology.” 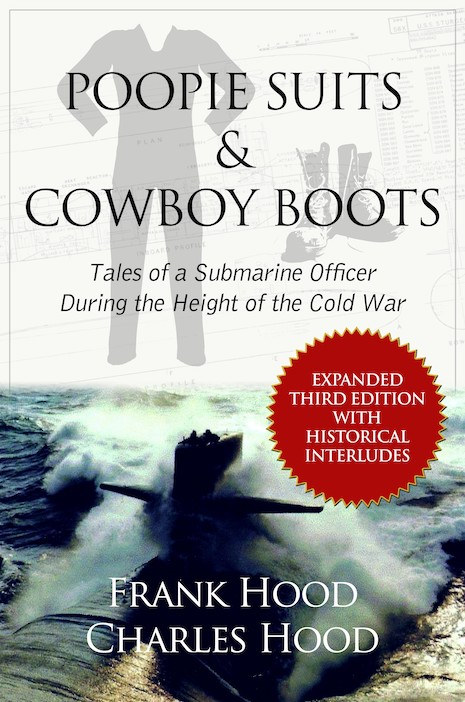 It's all in the family

Dr. Hood's son Michael - also an Honors graduate - designed the covers of all the books.