Many scholars and luminaries have spoken on the University of South Carolina’s historic Horseshoe. Earlier this fall, activist poet Horace Mungin joined the list of distinguished guests.

Speaking to the students of SCHC 384, “Finding Your Voice: Writing and Editing for Life,” Mungin discussed his six decades as a writer and poet. He read mostly from his new book, Notes from 1619: A Poetic 400-Year Reflection. Marking the 400th anniversary of enslaved Africans being brought to America, Notes from 1619 begins with “Last Dance of the Forest Virgin,” about a joyful bride on the African coast in the days before slaving, and concludes with “These Times,” a sobering comment on the United States in the 21st century. In between are poems about the injustices African Americans have suffered from the beginning of their time in this country to present day.

“Notes from 1619 is not meant to be a sunny stroll in the park, but rather a trek through a minefield that makes you better for having successfully maneuvered through it,” Mungin wrote in his Author’s Note. “Reading it is, perhaps, the closest many of you will ever get to the pain created by white supremacy and suffered by African Americans and, it is my hope, move you to become a catalyst for justice now.”

The collection also includes poems about jazz greats Billie Holliday and Charlie Parker, and his family. Marjory Wentworth, until recently South Carolina’s longtime poet laureate, wrote the foreword. Despite much of its heavy content, “there are moments of light scattered like stars throughout this book,” she writes.

Born in 1941 in Hollywood, South Carolina, Mungin grew up in New York City, where he attended public schools, studied English at Fordham University, and earned a living as a subway conductor. Soaking up the national Black Arts Movement, he began writing poems and following jazz musicians. His earlier writings appeared in the New York Times, literary magazines and poetry anthologies. In the 1970s he helped establish Black Forum Magazine and edited Press-Time, a literary newsletter. Mungin’s work also has appeared in Essence, Encore, and Black Books Bulletin. He and his wife, Gussie, a South Carolina native he met in New York, retired back to the Palmetto State in 1989. Since then he’s written several books of fiction, nonfiction, and poetry, winning prizes from the Piccolo Spoleto Festival.

“Horace Mungin represents a time in American history when African Americans found their place in the arts in the midst of a society ignoring their existence and value to American culture,” said Kay Banks, SCHC assistant dean for Student Affairs & Diversity.

“His visit is an example of the Honors experience, supporting student learning by providing an opportunity for students to interact with a published author,” Banks continued. “The students who aspire to write were able to ask questions about his writing style and the best time to write, as they evaluate their own writing ambitions.”

Mungin was invited by instructor Aïda Rogers, who edited Notes from 1619 in 2019.

“I was shocked to learn about the Red Summer of 1919 and Patsey, the enslaved woman in Louisiana who was beaten so violently by plantation owner Edwin Epps,” Rogers said. “And I was embarrassed not to know about these awful episodes in American history. I figured right away I would give each of my students a copy of this book and invite Mr. Mungin to speak. I didn’t want them to be as unaware as I have been.”

“Reading and listening to his poetry was an experience like none I have had before. It was engaging and educational all at once,” reflected Ellis McLarty, a freshman from Greenville, South Carolina, majoring in cello performance and mathematics. “I was embarrassed and upset to just now learn about these important cultural, historical movements such as the Black Arts Movement, yet I am simultaneously grateful that his art has exposed me to such an important part of our history.” 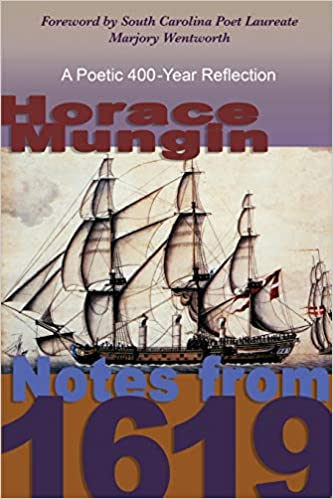 Mungin's book marks the 400th anniversary of enslaved Africans being brought to America,

Horace Mungin’s most recent collection of poems Notes from 1619: A Poetic 400-Year Reflection takes the reader from the Cape Coast of Africa to the shores of America while addressing the conscious erasure of African American history.

See the book on Amazon