Far from a dusty document

Adjunct professor and lawyer Joel Collins and the U.S. Constitution

After the Founding Fathers ceremonially dipped their quill pens in the inkwell and signed the Constitution of the United States of America, they went to City Tavern to celebrate. That was something they really knew how to do.

“They drank prodigious amounts of alcohol,” says Joel Collins, ‘68 law, who has been teaching an honors course on the historic document since 2010.

Collins’ course, titled “U.S. Constitution: Why and How It Was Created, How It Has Survived, and How It Impacts Americans,” is based on years of reading and research, and his realization that no course existed like his elsewhere.

Amanda Eure, ’19 dance, was so enthralled by the course she says it was the best she’d taken at the university.

“I loved that we focused on the historical context, and then brought it to present day,” she says. “It gave me an appreciation for everything that went into making the Constitution and how well it has held up over time — and how surprisingly modern it is.”

Each semester, Collins’ class takes a trip to Philadelphia to tour “the most historic square mile in America.” Besides the Liberty Bell, Ben Franklin’s print shop and grave and Christ Church —the steeple of which was the tallest thing George Washington ever saw — the students visit Independence Hall where the Declaration of Independence was signed in 1776.

The trip to Philadelphia — funded by the Honors College discretionary fund, which is established and replenished by generous donors — puts Collins and his students where the American Experiment officially began so students see firsthand what they learned about in class.

“History needs to come alive,” Collins says, describing the Assembly Room in Independence Hall with its green tablecloths and the mahogany chair where Washington sat.

And for freshmen Henry Coates (international business and finance) and Riley Sutherland (history), and sophomore Katherine Heck (English and global studies) the journey continues back home. The three have formed a self-study group to continue researching the Constitution. The group’s name? “We the People,” of course. 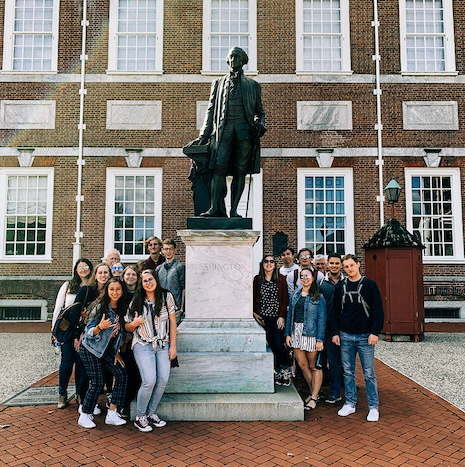 “They go flying up the steps,” Collins says of the students rushing up to the doors of the Philadelphia Museum of Art while the theme song from Rocky plays. “I don’t go flying up, but I do go up the steps.” 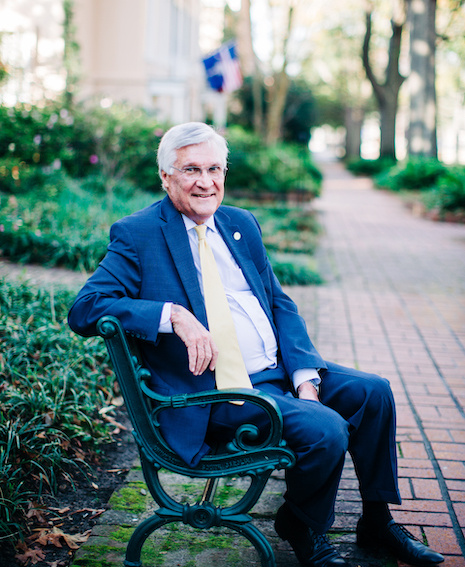 “Everybody needs to be a solid citizen,” Joel Collins said. “I want you to fall in love with the United States Constitution.”