Entering the South Carolina Honors College thinking medical school was in her future, Libby Davenport is leaving it for a different but related field. Instead of treating patients, she’ll be researching diseases. What made the difference? Biology professor Jeff Dudycha, his ecology and evolution course, and his labs, named for places in Lord of the Rings.

“I remember when Trenton Agrelius, the Ph.D. candidate who trained me, took me on my first tour of the labs and referred to them as Lothlórien and Rivendell,” said Davenport, ’20 biological sciences. “I knew I had joined a great group of people with similar interests.”

The Spartanburg native and Carolina Scholar spent five semesters and two summers in Lothlórien and Rivendell, studying Daphnia pulex, a microcrustacean that lives in lakes and ponds. Because Daphnia have many interesting reproductive strategies and under certain environmental conditions can produce genetically identical offspring, they offer a seemingly endless realm of experimentation for evolutionary biologists. Davenport was enthralled.

“I learned about phenotypic plasticity and evolutionary genetics in Dr. Dudycha’s introductory ecology and evolution course and right away I thought they were particularly interesting topics,” she said, recalling her childhood fascination with frogs, lizards, fish and crabs. “I felt I connected with these topics in a way I hadn’t in previous classes.”

Leaving pre-med behind and accepting Dudycha’s invitation to join his lab, Davenport embarked on two experiments with Daphnia. The first was small, a summer-long study investigating how two different food treatments affected juvenile growth rates of the Daphnia’s mutation accumulation lines. But the second experiment was huge. “Herculean,” said Dudycha. So complex, time-consuming, original and illuminating was Davenport’s experiment, which became her senior thesis, that she presented her research at two academic conferences and will be first author on a paper to be submitted to Evolution, an international journal about organic evolution. And, with English major Kati Russ, she won the William A. Mould Senior Thesis Award. Named for a founding dean of the SCHC and given by his family, the award recognizes the student whose work will have the biggest impact on their field of study.

“What do climate change, protein biophysics, and genetic mutation have to do with evolutionary biology? These disparate ideas of inquiry are brought together in a project that forms the basis of the best honors thesis I have seen in my thirteen years at USC,” Dudycha wrote in his letter nominating Davenport for the prize. “This is a project that was Libby’s own idea, and made use of a long-term experiment in my lab in a manner that I had not previously conceived to address a hypothesis that is largely untested in the biological literature.”

In laymen’s terms, Davenport studied 1,274 Daphnia—or 100,000 if you consider Dudycha’s accounting of their offspring – to see if warmer temperatures would affect their mutations. She chose a reasonable temperature – 24 degrees Celsius, or 75.2 Fahrenheit – to reflect climate scientists’ predictions for warmer water temperatures over the next several decades. Setting up such an ambitious study required six months of almost daily lab work. Working a half-day Christmas Eve, she was back the next afternoon.

And then came Jan. 5. In the lab at 9 p.m., she discovered that the Daphnia’s maternal generation would produce enough offspring within the next 12-24 hours for her to begin the experimental phase. Everything would start the next morning. Davenport knew Jan. 6 would be one of the most exciting of her undergraduate career. “It was a super-long day but I didn’t care. I was happy I made it that far because it took so much work to have all of those lines in sync with each other before I could set up the experiment.”

Arriving just after 5 a.m. and leaving a little after 11 p.m., Davenport’s 18-hour day was fueled by a breakfast bar, a small lunch, and adrenaline. “This was my experiment, a big milestone for me,” she said. “My mind was not on stopping to rest or eat. It was, ‘OK, I have two more lines to set up, let’s do that.’ It was a great feeling to finally have the experiment up and running because I knew that I would have data to analyze at the end.”

And what did she learn, working seven days a week through the end of February and learning how to use the software environment R for statistical analysis? Here’s Dudycha: “Libby’s project demonstrates a contribution to the field because she arrived at a clear answer: No.”

“Surprising” is how Davenport describes the findings. “I expected an interaction between elevated temperature and mutational history. I thought that temperature might increase the magnitude of deleterious effects of accumulated mutations on fitness-related traits of Daphnia. Especially in the later clutches, it really looked like there might be an interaction based on preliminary graphs, but once I completed the statistical analyses, there wasn’t a significant interaction between factors. This didn’t support my hypothesis, but at the same time, it’s a result. It’s still interesting and makes me wonder why we observed these patterns. In science your hypothesis might be wrong, but you work hard to interpret the results and then propose the next experiment.”

In her 39-page thesis paper, “The Temperature-Dependent Effects of Spontaneous Mutations on Life-History Traits,” Davenport describes her work and findings. But she doesn’t discuss her future, which includes pursuing a Ph.D. in ecology and evolutionary biology at the University of Michigan, which has one of the best programs in the country, according to Dudycha’s nomination letter. There, he adds, his stellar student will continue her work with Daphnia pulex, “evaluating how mutations affect disease susceptibility in natural populations, a topic on which there are zero published papers.”

Davenport is happily anticipating her scholarly career. Presenting her work at the national Evolution Meetings in Providence, Rhode Island, and the regional Southeastern Population Ecology and Evolutionary Genetics conference in Pendleton, South Carolina, put her in contact with others of like mind.

“I felt like I had become part of the larger scientific community,” she said, adding that she hopes she can be as helpful a professor to her students as Dudycha and so many others were to her, including Carolyn Wessinger, second reader for her thesis, and Megan D. Gamble, Deanna Smith, Daniel Speiser, and Joshua Stone.

Doing more work with Daphnia pulex is exciting, too. “These freshwater microcrustaceans are awesome model organisms,” she said. “I can’t wait to design my next experiment!” 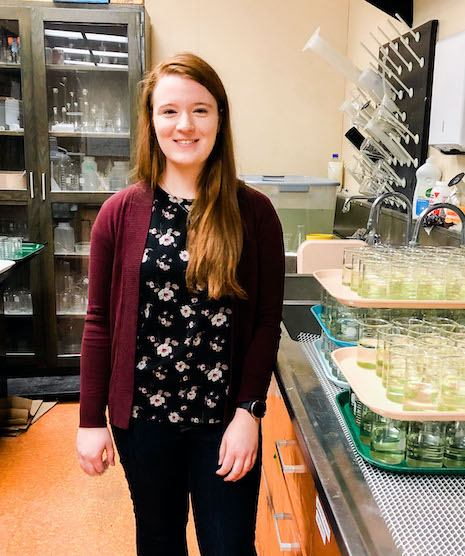 Recent Honors College graduate Libby Davenport received the 2020 William A. Mould Senior Thesis Award for her work studying Daphnia pulex, a microcrustacean that lives in lakes and ponds. Because Daphnia have many interesting reproductive strategies and under certain environmental conditions can produce genetically identical offspring, they offer a seemingly endless realm of experimentation for evolutionary biologists.