Before this semester, Lucy Pratel said her formal education on the Holocaust was minimal.

"When you first learned about it, it's like — you didn't have blonde hair and blue eyes... you got killed. And it's just so much more than that," the sophomore public health student said.

Now Pratel spends a few hours every Monday among pictures, interactive exhibits and replicas that tell the story of the Holocaust through the eyes of a girl that was only a few years younger than she is.

Pratel is a part of one of the South Carolina Honors College's newest classes, SCHC 326, Engaging the Legacies of Anne Frank: A History for Today.

The class allows Honors students an opportunity to dive deeper into a discussion about the causes and impact of WWII and the Holocaust through the legacy of Anne Frank, a 15-year-old Jewish girl whose diary detailing her time in hiding from the Nazis has now sold over 70 million copies.

Students meet at UofSC's Anne Frank Center, where Dr. Doyle Stevick encourages them to go beyond just remembering the Holocaust.

In each class, Honors students take time to reflect and respond to the themes of the Holocaust on a deeper level. To Stevick, it is not just a class on history.

"When we think of that hierarchy of learning, it's easy to absorb facts, information that's not so difficult. Developing skills is harder, developing pro civic attitudes and dispositions that's harder still," said Stevick.

Through guest speakers, readings and engaging lectures, students learn that the problems of WWII Germany are not isolated and not ones of the past.

"The atrocities of the past were produced by sets of ideas that often outlive crime. And until we dismantle those ideas, then we'll continue to have crimes such as attacks on synagogues or the Mother Emanuel church," Stevick said. "And that's what we have to be able to dismantle."

As a civic scholar, Stevick pushes his students to use the lessons of the Holocaust to inspire activism and encourage them not to be bystanders amid injustice.

"Young people understand the negative power of peer pressure, but they often don't recognize the flip side, their own ability to make a positive difference," said Stevick.

Honors freshman Peter Cadwell said this class has helped him realize his unique position as a student at the University of South Carolina to learn from the Holocaust and make a difference in present issues.

"We talk a lot about Southern history and how it's very, very connected to the events of the Holocaust and Nazi Germany," said Caldwell. "So many people were just complicit, even if they didn't necessarily approve of what the Nazis were doing or saying, and that's such a big issue. And that's basically a sign that if we see something unjust, we really do need to advocate for it."

In SCHC 326, the learning goes beyond just this semester.

By the end of the course, students will complete at least four guided tours for students or visitors and become certified peer leaders, which they can serve as until their graduation.

Pratel said that she uses extra moments to explore the exhibit further and prepare for teaching her peers in the future.

"Like, oh, this picture is really cool, like mental note, I'm gonna explain this one," Pratel said. "It doesn't feel like a class; it kind of feels like you're just in a really cool, immersive environment."

Stevick said that allowing students to serve as peer leaders gives them a unique opportunity to share knowledge and start meaningful conversations in a way that others cannot.

"So, recognizing that young people often speak one another's language, frame things in terms they relate to," said Stevick. "We certainly see with volunteers that as they get involved, their enthusiasm is picked up by their friends and colleagues, and so very often their friends will want to come for a visit, and it's just a snowball effect from there."

Stevick said that he hopes students use Frank's story to learn that they can make a difference.

To visit the Anne Frank Center at UofSC, students and the public can schedule tours online.

Sydney Dunlap is a freshman in the South Carolina Honors College majoring in journalism and mass communications. Originally from Greenville, South Carolina, she plans to pursue a career that combines her passion for writing and photography. She writes and takes the photos for her articles. 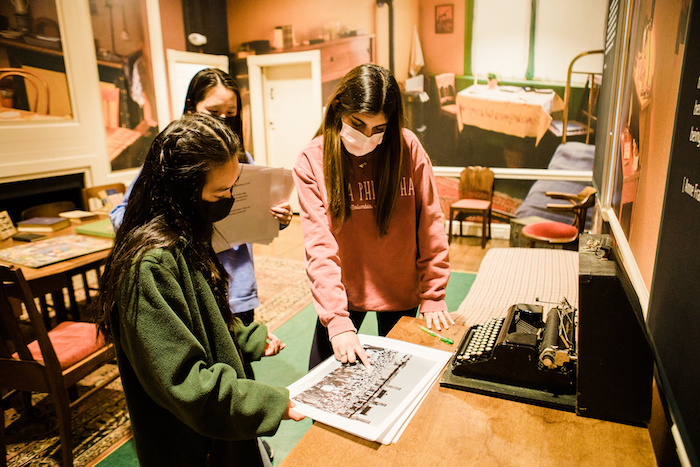 SCHC 326: The Legacies of Anne Frank

A new Honors course centered around the legacy of Anne Frank offers students the opportunity to study the past to become future leaders.