A Letter from the Dean

Here is an answer that I feel sure is going to appear some day on the big board of “Jeopardy!”: “Sapere aude”. And the correct question? Well, it’s got to be “What is the motto of the South Carolina Honors College?”

I suppose (smile) the judges would also have to accept “a phrase from the Roman poet Horace’s “First Book of Letters” (20 BC); or, a phrase that has been translated as “dare to know,” or “boldly seek the truth,” or more loosely, “have the courage to use your own reason”; or, a phrase that has been adopted and cited many times, perhaps most famously by Immanuel Kant in “What Is Enlightenment?” (1784), where Kant claimed the phrase as the motto for his time.

The Enlightenment, the Age of Reason, points of course to the effort in the 17th and 18th centuries to use science and logic to get beyond superstitions and unexamined assumptions and bias. Two hundred years later, the philosopher Michel Foucault, in an essay also titled “What is Enlightenment?”, argued that the Enlightenment is “an attitude, an ethos, a philosophical life” that must include “the critique of what we are.” We need not only to look courageously at the world we inhabit, but we also need to examine ourselves.

As the SCHC’s motto, “Sapere aude” appears on the back of the Honors College medallion, which graduating students receive at Revocation and wear proudly at commencement the next day. (The medallion’s front is a lovely engraving of the Maxcy Monument, some Horseshoe trees, and DeSaussure, the 1809 building that houses, along with Harper, most of the Honors College staff.) The medallion and the motto are both fairly recent additions to the Honors College’s traditions, and it’s fair to say both have been well-received.

In less contentious, less polarized times, it might seem unnecessary to encourage ourselves to seek the truth or to think that courage or boldness would be needed for that effort.  At the moment, however, our motto seems especially fitting. And the various disagreements we are having about what is true; about what are the facts, and what do they mean; about what is fair and good, and how we should pursue life, liberty, and happiness—these are opportunities for all of us. Our students, I feel confident, are being well-prepared to engage in this seeking to know. Your interest and support in that effort is greatly appreciated, and I hope you enjoy this edition of our newsletter. 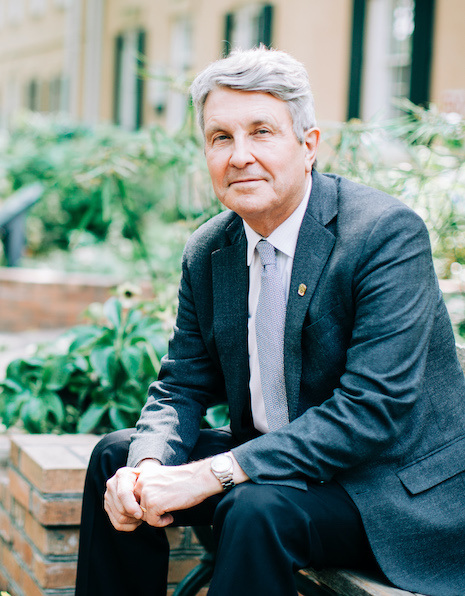 'From the front lines'

‘Teaching what history is’

‘They broke down the barriers so I could be here’