Without even needing a moment to think, Jackie Parnell, a 2012 graduate of the South Carolina Honors College and Columbia native, knew exactly what led him to where he is today.

At the end of his sophomore year, the Columbia native recalled walking through the Honors College office to say goodbye to everyone before summer. Beth Hutchison, the director of internship programs at the time had her door open. She heard Parnell mention he didn’t have an internship for the summer, and she told him that First Citizen's Bank was looking for an intern. And the rest was history.

“That was the internship I was meant to be placed in,” he recalled.

During his first week, he was asked to look at code that the company had been trying to work through. He credits that as the moment that set his trajectory for the rest of his career.

“Instead of just being a finance person or just a data person, I was able to always be that hybrid person that could talk between the tech side and the finance side. I don’t know how long it would have taken me to get to that point if I hadn’t met Beth Hutchison that day,” said Parnell.

As a freshman, he wanted to study both finance and computer science and told his advisor, “I think the future of the world is data.” Fittingly, he is now a data manager at Bank of America in Charlotte, North Carolina where he focuses on pricing strategy and analytics for their corporate commercial clients with his team.

During his time at the university, Parnell was also a Carolina Scholar. He fondly recalls the close-knit community that he formed during his time in the Top Scholar program that are still his go-to friends to this day.

“I have a daughter now, and whenever something is wrong with her, I can text my doctor friend who was a Carolina Scholar… or whenever I’m trying to buy a house, I text my Carolina Scholar friend that’s in real estate.”

“It’s been very helpful having that community both in college as friends, but now professionally as people I can reach out to who I trust,” said Parnell.

One of the hallmark events hosted for Top Scholars, the etiquette dinner, was one of his favorite memories.

Parnell laughed as he said, “I very much needed that etiquette dinner because I was very much a chicken tenders and fries, eat with my hands person.”

On a serious note, he says that the experience and knowledge has been incredibly useful in his post-college life.

Parnell now is also a father with one daughter and another on the way.

“My focus has shifted. My most important job is being a father,” he said.

When asked what advice he could offer to students, Parnell explains that the biggest thing that the Honors College offers is “the opportunity for unlimited creativity.” He encourages students to explore all their interests and take whatever courses they want to take.

“College is this very unique four-year time period… soak up those four years and make the most you can of them.” 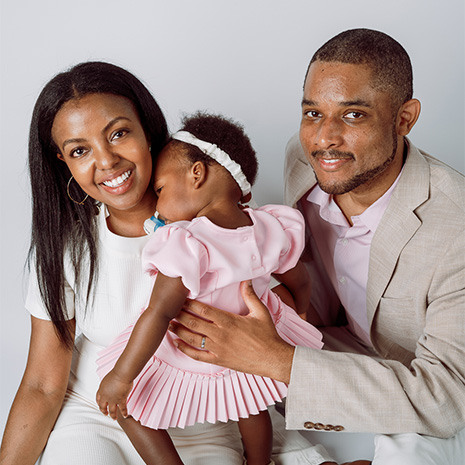 Jackie Parnell '12 credits his career path to an internship during his time at the Honors College.