As part of this semester’s equity, diversity, inclusion and social justice programming, the iSchool Social Impact Committee and Diversity Leadership Group hosted a discussion on Caste: The Origins of Our Discontents by Isabel Wilkerson. The discussion was led by iSchool alumnus Gerald Moore ('96 MLIS).

Caste looks at the system of hierarchy at play in American society, dating all the way back to the founding of the country. Author Isabel Wilkerson compares and contrasts the American caste with that of India and Nazi Germany, examining these systems through a framework of eight pillars that uphold the rigid rules and expectations of the caste structure.

In his discussion of the novel, Moore asked thoughtful questions about the work and facilitated an open space for attendees to relate to the topic. The group discussion touched on the intersection of race and caste in American society, especially as it relates to being Black in the United States. The discussion also landed on ways to fight against the caste system with many participants concluding that an accurate depiction of American history is crucial for the work of dismantling pervasive systems of oppression. Finally, participants reflected on the ways that the caste system keeps those in power at the top and wedges a divide between those lower on the hierarchy.

Elle Boyle is a social media intern for the College of Information and Communications. She is a junior information science major with a minor in applied computing. Upon graduation, Elle plans to pursue a career in technology. 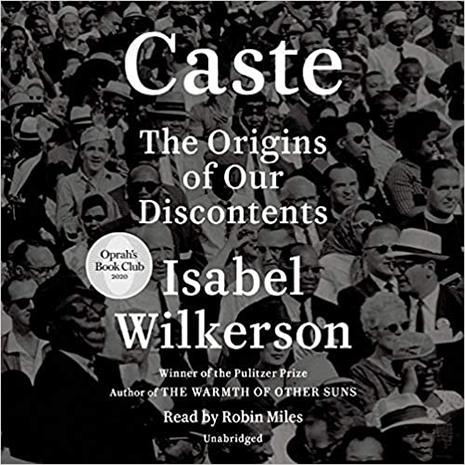 Caste is among this year’s finalists for National Book Critics Circle prizes.