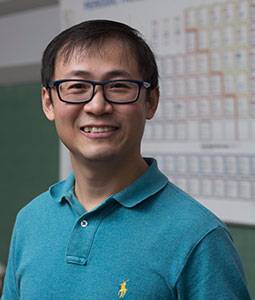 Dr. Li Cai is an organic chemist and glyco-scientist whose research focuses on carbohydrate chemistry, enzymatic synthesis of carbohydrates, and chemical glycobiology. Dr. Cai is also devoted to enhancing the teaching and learning of chemistry, which includes advising undergraduate researches. He joined USC Salkehatchie in 2011 as an assistant professor and was promoted to associate professor with tenure in 2016. In summer 2017, he joined the faculty at USC Lancaster.

Dr. Cai was born in Chengdu, China in 1982. He received his B.S. degree in Pharmaceutical Sciences and M.S. degree in Medicinal Chemistry (with Prof. Zhenjun Yang) from Peking University. He then attended the Ohio State University, where he earned his Ph.D. (with Prof. Peng George Wang) in Organic Chemistry. He has published more than 22 peer-reviewed papers in chemical research and education (among more than 40 publications total) since joining the USC faculty. He is a member of the editorial board of 1 journal and has reviewed more than 70 manuscripts for 32 journals. Some of his awards include: 2016-2017 USC Breakthrough Star Award; 2016 USC Salkehatchie Faculty Award for Excellence in Scholarship; Chinese Government Award for Outstanding Self-financed Students Abroad (2010); Ohio State University Fellowship (2007).

Professor Cai Li is the author of many published works in his field. Please find a complete list of his accomplishments here.