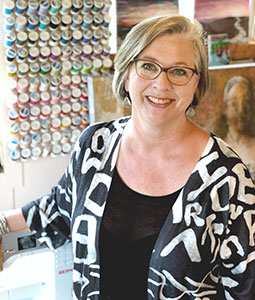 A native South Carolinian, Fran Gardner lives and works in the communities of Heath Springs and Lancaster, not far from her birthplace, Hartsville. She earned her BFA from Columbia College (1982) and later, her MFA from Vermont College of Norwich University (1993). She is professor of art and art history at the University of South Carolina Lancaster where she teaches a variety of studio courses, art history, appreciation and art education. Her work has been exhibited regionally and nationally and published in Fiberarts and Needle Arts magazines and in the books Expressive Drawing, by Steve Aimone, Crafting Personal Shrines, by Carol Owen, and The Art of Textiles, by Mary Schoeser. In Fiberarts, writer Rhonda Sonnenberg described Gardner’s work:

While she is generally known as a fiber artist, Gardner has gained attention in mixed media collage. She paints and draws with traditional materials, but also with the sewing machine, layering her work with rich texture, color and mark-making.

Gardner has won a variety of awards in competitive exhibits both statewide and nationally. In addition she has exhibited at numerous art centers and museums including the Florida Museum for Women Artists in Deland, Florida. Of her exhibit at Watson MacRae Gallery at Sanibel Island, Florida, owner/curator Maureen Watson said, “For those who think conceptual art sterile and cold, Gardner’s work shows us it can have beauty, soul and meaning … art at its best."

A career highlight was the invitation to be a National Park Artist-In-Residence at Chaco Culture National Historical Park in New Mexico in 2012. While in residence, she produced 30 8”x8” pieces to be installed permanently in the Visitor Center. Her piece focused on the excavated architectural structures of the ancient Chacoans, an archeological feature of the park.

In addition to creating and exhibiting her work, she has taught workshops, judged exhibitions, and written about other artists' work and lives. Her critical essay “Between the Seen and the Unseen” is published in monograph and surveys 35 years of figurative work by Florida artist Beau Wild.