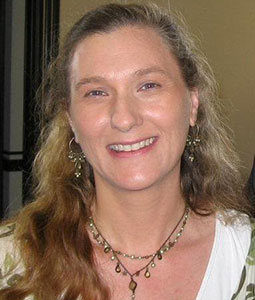 Mrs. Priest was the linguist for the Catawba Cultural Preservation Project from 1995-2004. She has continued working with the Catawba Indian Nation, while teaching at Winthrop University, Chester Middle School, and York Comprehensive High School. She teaches full-time at USC Lancaster since 2007 and has been at the growing Native American Studies Center since 2012.
She was born in Ontario, Canada and she grew up in Canada, Germany, Spain and France. She went to school in Canada, Germany and Spain, and graduated from Waterloo Collegiate Institute in Canada. She earned her B.A. from University of Waterloo, Canada, her M.L.A. from Winthrop University and her M.A. in Linguistics from USC. She is currently pursuing a Ph.D. in Comparative Literature at USC Columbia.

She successfully passed her Comprehensive Exams in January and April of 2017 and her Oral Exams in May 2017. She is currently working on her dissertation.

She learned German as her first language, French and English by the time she was three. She learned Spanish while going to school in Spain when she was nine. She took Russian in University and started to learn Greek and Japanese on her own. She has been working on the Catawba language since 1995. Languages have always been a part of her life.
She loved Chemistry, Geography and Mathematics in high school, and wanted to become a Geological Engineer. Then in the first two years of University, she did Theater until she finally realized that she just was not going to get away from her language background.

Mrs. Priest taught German in her Saturday German Language School when she was sixteen and kept on teaching various subjects, mostly languages and literature, since then. She has taught pre-school through college level.
She did her first big translation when she was nineteen, and has not stopped translating since. She has translated for individuals and big corporations, such as Siemens-Westinghouse and Husqvarna. She owned a translating business, which she did when she was not at the Catawba Cultural Preservation Project (CCPP) until the birth of her daughter in 2000. She went back to college in 2001 to earn a second Master’s degree (harder to do with kids). She finished in 2005, but didn’t graduate until August 2007. She started teaching at USCL in August of 2007.
She enjoys working with children. She tries to teach children both hands-on and concepts of languages, literature, and culture.
Mrs. Priest spends as much as possible with her family, which doesn’t leave too much time for anything else. She likes to read, write, create, and watch specific movies.

She rides a motorcycle and goes camping whenever she can!
Even though she dislikes the headaches and backaches she gets from sitting and staring at the computer screen too long, she enjoys practicing linguistics and comparative literature. While comparative literature makes connections, linguistics as a field is like a puzzle. She love puzzles and it is a challenge to find that missing or hiding piece.

Linguistics and comparative literature are definitely not for everybody. You really have to love what you do. For the most part, you are not going to become rich practicing linguistics and doing comparative literature. A lot of people are going to ask you what purpose your field has. You spend a lot of time explaining what it is that you do, exactly