Mayor Pete Buttigieg has emerged in South Carolina social media conversations as the most significant threat to Democratic frontrunner Joe Biden, according to a new analysis by the University of South Carolina Social Media Insights Lab.

In the lab’s Insights Index for December, Buttigieg moved ahead of Bernie Sanders and Elizabeth Warren in the number of conversations or share of voice. Biden continues to be the most discussed candidate by a wide margin. However, despite an increase in his positive sentiment, Biden still trails the other three frontrunners. Buttigieg holds the highest positive sentiment of the four presidential hopefuls.

Early in the race, Buttigieg held the highest positive social sentiment among top Democratic candidates but trailed Joe Biden, Bernie Sanders and Elizabeth Warren in recognition and mentions. In November, as Buttigieg’s visibility increased on social media, he saw increased scrutiny and a dip in positive sentiment.  (See Report») But in December, the South Bend mayor saw a marginal increase in positive sentiment. (image one)

What could the latest Palmetto State data mean for Biden ahead of the Feb. 29 primary?

“It shows vulnerability,” says Insights Lab analyst Sam Johnson, a former strategist for Columbia Mayor Steve Benjamin. “While Vice President Biden’s voice continues to drown most of the candidates out, Mayor Pete’s surge in front of Bernie and Elizabeth shows that voters are still trying to pinpoint which candidate really has the secret sauce to beat Trump. The fluctuation and volatility in the field shows there are still a lot of twists and turns to come.”

Joe Biden has also seen a shift in social conversations. While Biden and his son’s ties to Ukraine are still the most talked about topic among in the 2019-2020 presidential race, fewer social media users discussed this particular issue in December (image four). As a result, Biden’s total mentions and share of voice decreased, and his positive social sentiment increased from about 9 percent to more than 12 percent. (image one and two)

“Social media users in South Carolina are talking less about Biden and Ukraine,” says lab manager Kaitlyn Park. “This has contributed to a decline in Biden’s share of voice, but more notably, it also correlates to the increase in Biden’s positive social sentiment. Put simply, social media users are beginning to move on from the Whistleblower scandal and are looking instead to where Biden stands on certain issues and his electability, placing him on the same field as his opponents.”

Following Kamala Harris’ exit from the presidential race, the leading candidates saw an increase in total mentions and conversations in December. The Social Media Insights Lab will track how Harris and Cory Booker’s exits have affected the social media buzz around the Democratic race.

Top four candidates were determined through national polling on Real Clear Politics. Since March, the lab has analyzed more than 432,822 posts about the leading Democratic candidates, nearly 53,857 of which were in December. 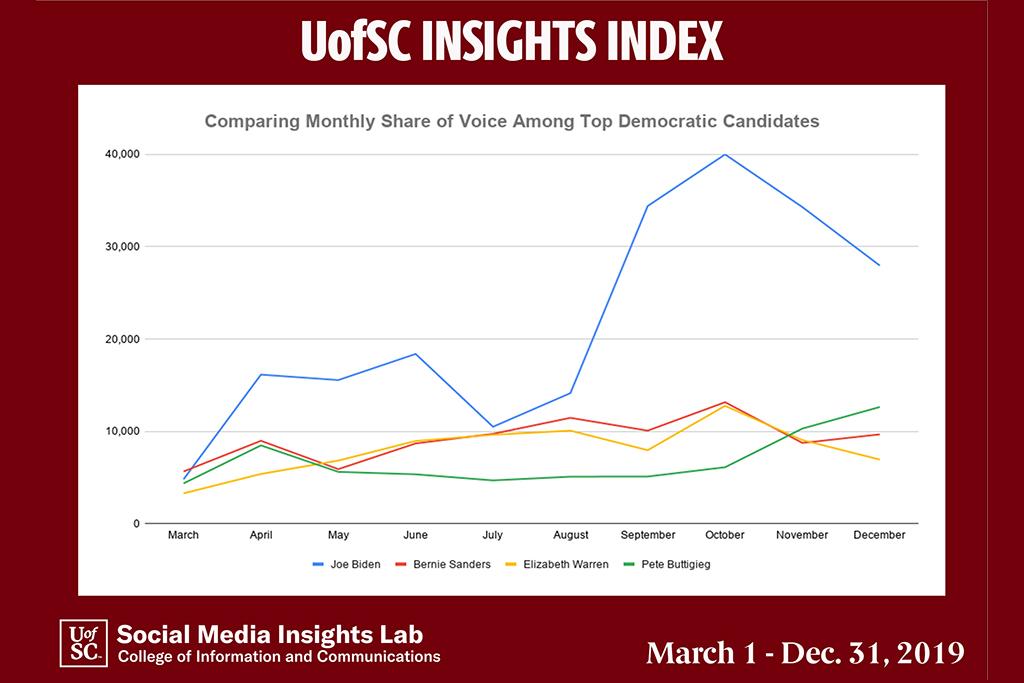