Conversations about Pete Buttigieg increased significantly in November among South Carolina social media users, according to the latest Insights Index from the University of South Carolina Social Media Insights Lab.

The South Bend, Indiana, mayor has trailed the four other top-polling presidential candidates — Bernie Sanders, Elizabeth Warren, Joe Biden and former contender Kamala Harris — in share of voice since mid-May, despite leading the pack in positive sentiment. But Buttigieg saw a marked uptick in mentions in November. That trend coincided with a decline in share of voice for the other four candidates, giving Buttigieg the second highest share of voice at November’s close. Biden still dominates public conversations among social media users in the Palmetto State, coming in at approximately 34,000 mentions in November, compared to just over 10,000 for Buttigieg.

“The data shows us that there has continued to be two sections of the field: Joe Biden and everyone else,” says lab analyst Sam Johnson, a former strategist for Mayor Steve Benjamin. “Based on Mayor Pete’s growth, we see he is now leading the pack in trying to catch the former vice president. However, the question is whether he will be able to pull away from the others.”

The rise in conversation volume does not necessarily indicate a rise in favor among South Carolinians. In fact, while the mayor dominated the other candidates in positive sentiment from March through October, he saw a sharp decline in November, losing his lead to Harris.

“What we have seen with Mayor Pete is that while his share of the audience has grown, the scrutiny that also comes with that attention has increased his negatives,” Johnson says. “Unlike the 2016 presidential cycle, however, we do not know whether having significant negatives will hurt a potentially successful presidential candidate.”

Harris announced her decision to pull out of the race on Dec. 3, citing a lack of funding. Despite her campaign’s monetary woes, the senator saw record high positive sentiment in November and had been on an upward trajectory since July. She was the most tagged Democratic presidential candidate on Twitter in the state during October, according to the last Insights Index.

“Harris consistently saw growth in mentions and positive sentiment during her appearances in Democratic debates,” Insights Lab manager Kaitlyn Park says. “During her November debate performance and the day after, her #KHive supporters on social media here in South Carolina drove that higher buzz. But it didn’t sustain itself. Her total positive mentions were actually down by the end of November.”

Since March, the lab has analyzed more than 452,104 posts about the leading Democratic candidates, nearly 68,153 of which were in November.

A report scheduled for release later this month will examine how some of the other presidential hopefuls — including Andrew Yang and Michael Bloomberg — are faring as the February primary approaches. 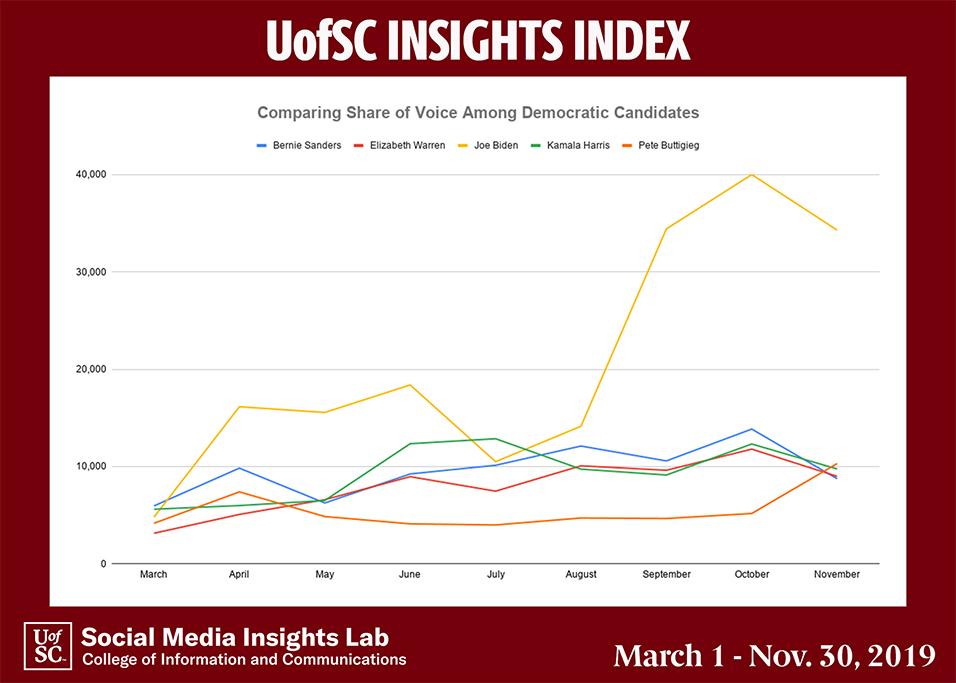