South Carolinians on social media discuss President Trump nearly three times as much as they discuss the five leading Democratic candidates combined, according to a new analysis by the University of South Carolina’s Social Media Insights Lab. And while the president has the lowest positive and highest negative sentiment of the six contenders studied, his rates have seen little fluctuation since March.

The Insights Lab examined nearly 1.4 million publicly available conversations in South Carolina between March 1 and September 30. More than 1 million of those were about Trump. By comparison, the candidate with the second-highest number of mentions, Joe Biden, had just one-tenth that number – about 98,000. Biden was followed by Bernie Sanders with 63,000, Kamala Harris with 61,000, Elizabeth Warren with 50,000 and Pete Buttigieg with 38,000. (See graphs 1 and 2.)

“When you look at the sheer volume of posts, it’s clear President Trump is one of the most influential people on social media,” says lab manager Kaitlyn Park. “But a high number of mentions doesn’t necessarily equate popularity.”

Where sentiment is concerned, posts about Trump skewed more negative and less positive than those of other candidates. The lab’s software categorized 45 percent of Trump-related posts as negative, 43 percent as neutral (which includes news mentions) and 12 percent as positive.

Similar percentages are seen among the leading Democratic candidates, with the exception of Buttigieg, who has seen consistently low negatives and high positives since announcing his candidacy in March. He is currently at 25 percent negative, 51 percent neutral and 24 percent positive. (See graph 3.)

When examining how Trump’s sentiment has changed over time, the lab found that the president’s positive and negative sentiment percentages have remained relatively steady since March. (See graph 5.)

“In general, we see a lot more fluctuation in sentiment among other candidates depending on what is happening in the news cycle,” says Park. “But, in the case of President Trump we see a bit more insulation from the effects of major news events.”

The findings come one day before Trump’s scheduled visit to the state for the Second Step Presidential Justice Forum at Benedict College in Columbia. The president and several Democratic candidates, including the five tracked in this report, will speak on criminal justice reform.

About the date range
The lab assesses conversation volume and sentiment percentages at the close of each month as part of its new Insights Index project. This analysis does not include October’s figures — that data will be released in early November

The Insights Lab software, Crimson Hexagon, uses artificial intelligence to interpret data. View a full list of reports at sc.edu/uofscinsights and follow the lab on Twitter at @UofSCInsights. 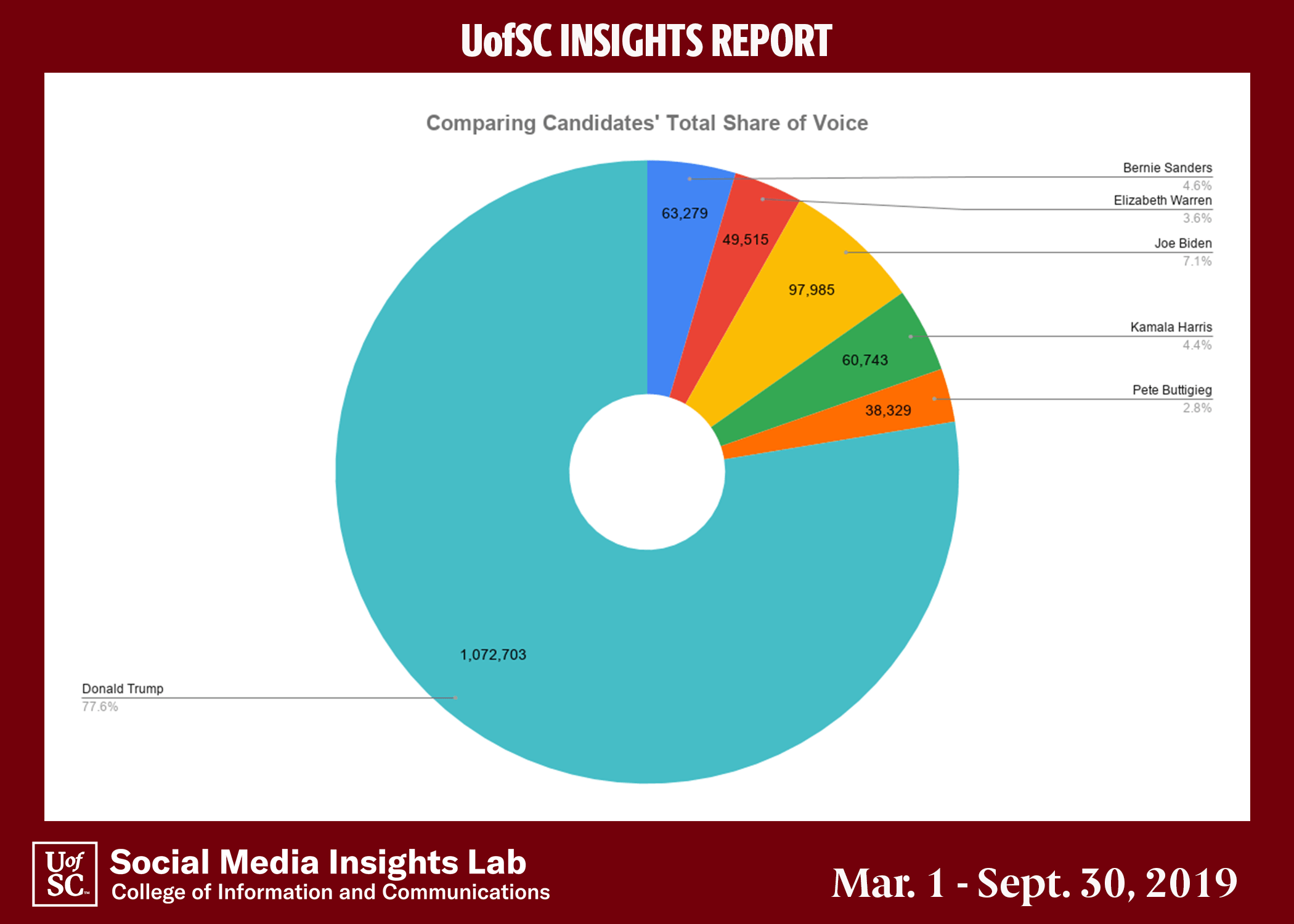