The UofSC Social Media insights Lab analyzed more than 10,000 Twitter posts, news mentions and comments on publicly available Facebook pages related to the All Out May 1 rally. Two-thirds of them (67 percent) were positive, including support from significant social media influencers such as Democratic presidential candidates Joe Biden, Cory Booker, Kamala Harris and Bernie Sanders.

The Insights Lab searched for all conversations that tagged the SCForEd account, used #SCForEd, comments related to SCForEd, mentions of All Out May 1 and #AllOutMay1.

Initial analysis found that public sentiment was more positive than negative. The positive comments included personal stories about the impact teachers have made as well as simple expressions in support of educators advocating for themselves and for their students.

Using Crimson Hexagon’s Opinion Monitor, the Insights Lab was able to measure positive sentiment at 67 percent, and able to identify drivers of positive sentiment. Prominent categories included: general support of educators, support that addressed a specific issue, and then educators who either were present at the rally or expressing their endorsement of the rally. These posts included language that identified the user as an educator.

Neutral mentions addressed all mentions that did not necessarily express positive or negative sentiment about the rally. These topics included posts about crowd size, general news mentions and signs at the rally.

Several South Carolina public figures expressed that they did not support the rally, and 8 percent of neutral mentions were related to backlash against these figures. These negative mentions were not counted toward general negative sentiment of the rally.

General negative sentiment was measured at 8 percent. Among those who criticized the protest, common themes related to potential disruption from teachers’ absence in classrooms and potential ties between outside unions and the rally.

The analysis by the Insights Lab, which is part of the College of Information and Communications, found the specific issues that appeared most in conversations were smaller classroom sizes and increased teacher pay.

“We saw a lot of energy and support at the State House and that was mirrored on social media,” said Kaitlyn Park, Insights Lab manager. “Social media listening allows us to monitor exactly how a movement like All Out May 1 resonates with users.”

“We’re tapping into conversations around the state and beyond to gain concrete, measurable insights about the issues, events and people that matter to South Carolinians,” said Tom Reichert, dean of the college.

This study is the first in what will be a series of South Carolina Insights reports that will analyze social media conversations on relevant topics. The South Carolina Presidential primaries will be a major focus.

Housed in South Carolina’s School of Journalism and Mass Communications, the Social Media Insights Lab uses powerful Crimson Hexagon software to generate, visualize and interpret data on everything from consumer sentiment to crisis response. Since its launch in January 2019, the lab has enhanced the university’s research efforts and raised its profile as a thought-leader in social media analytics. 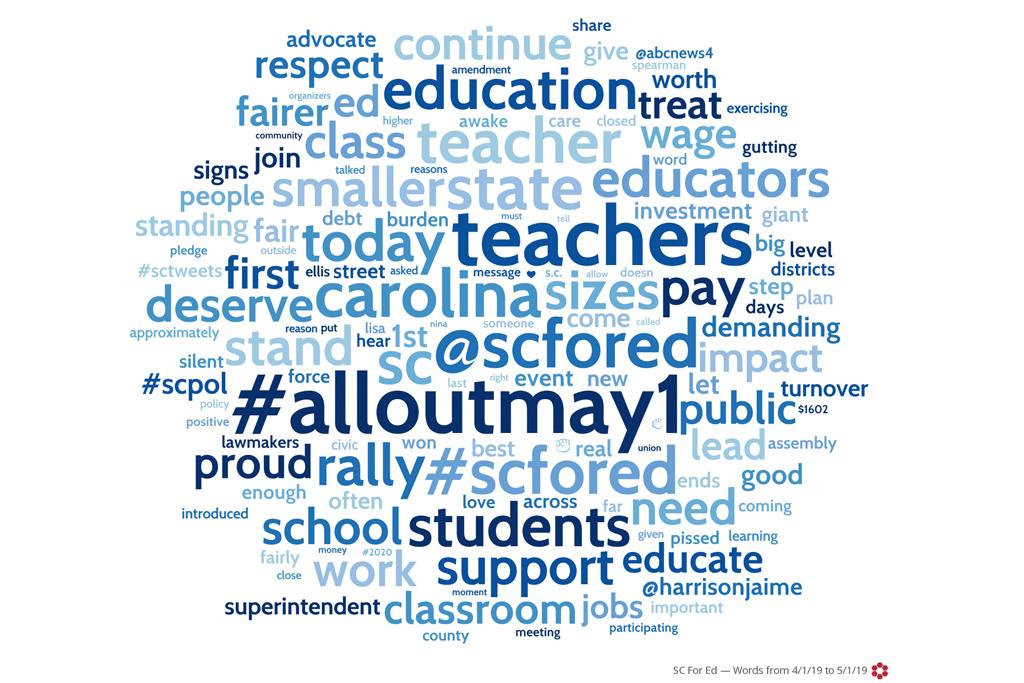 See some of the results of the analysis.