Christopher Rosa, 2011 SCSPA Journalist of the Year and 2015 School of Journalism and Mass Communications public relations major, has found his voice as an entertainment staff writer for Glamour.

Talk a little bit about your path since graduating from the University of South Carolina in 2015. Have you always wanted to pursue a career in entertainment news? What do you like best about writing for Glamour? What recent pieces or projects are you most proud of?

VH1 offered me a job as an entertainment writer two months before I graduated, which is a privilege not many young people in this field get. I had the luxury of knowing exactly what I was doing post-grad, so I could make my New York City plans and fully enjoy the cap-and-gown festivities. I worked at VH1 full time from June 2015 to August 2016. (Prior to that, I was an intern for three months, and I freelance wrote for nine months.) VH1 gave me such an education in entertainment writing. I wrote everything from breaking news to listicles to critical essays, and I covered a variety of topics in the entertainment spectrum. The flexibility of the brand allowed me to define my own voice, which was a huge asset when I applied to my current job at Glamour. Glamour wanted an entertainment writer whose work oozed personality, passion and wit, and because I had just spent a year defining my voice, my work had all of that.

My work at Glamour runs the gamut. My mornings are spent writing trending and breaking pop culture news, and my afternoons are spent on lengthier projects like essays, listicles, and analyses. I love writing for Glamour because I’m also their audience. I’m writing for people who are just like me — people who are passionate about the same TV shows, movies, and celebrities. Because I’m writing for my own tribe, my work is effortless, more energized, and stuffed with color. It’s much harder to write passionately about topics you don’t like. When you actually love what you’re writing, magic happens. And Glamour is that for me.

Currently, I’m most proud of a piece I wrote about the media’s portrayal of Jennifer Aniston during the Brad Pitt and Angelina Jolie divorce. I thought it was smart, witty, and made some good points about how our culture at large defines happiness for women.

I was also proud of this piece I wrote about grievances I had about the TV show “Gossip Girl,” because who doesn’t like a little bit of tea?

You spent two summers interning for Viacom Media Networks, which owns brands such as VH1, MTV and Nickelodeon. How did that experience help you narrow your career goals and find your voice as a writer?

Both internships required me to have an opinion about entertainment. They didn’t want cut-and-dry copy about the news. That’s what People and Us Weekly are for. Having to think critically about entertainment — and not just report on it — defined my voice. It made me realize that my natural opinions about pop culture are lighthearted, humorous, and flamboyant, so that’s how I wrote. When I kept getting positive feedback, I realized that maybe my voice was special, so I refined it. Now, that flamboyancy is what people notice first — and appreciate most — about my writing. I found it because my editors encouraged me to have an opinion. They encouraged me to think. And, most importantly, they encouraged me to let my personality shine through my work.

In terms of career goals, my internships taught me that maybe my future was more in next-day analysis than breaking news. Don’t get me wrong, I love breaking news, but I got more enjoyment out of the listicles, the critical essays, and the longer-lead projects at my internships. Some people get a rush being the first person to report on a story. I get that same rush when I write an intelligent analysis about pop culture that people respond to.

How did your involvement with student media at USC open up doors for you as a journalist?

My early clips at The Daily Gamecock are the reason why I got the local internships, which led to internships at MTV and VH1. There is a chain you have to follow if you want to land a job in media, and it starts with working at your college newspaper, magazine, radio, or TV station. The work you do there will open up small doors, which will later open up big doors and, eventually, a job. I’m no exception to that rule.

How did you first get involved with SCSPA? How did SCSPA shape your interest in journalism and blogging?

My high school journalism teacher, Tressie Hays, got me involved with SCSPA. I didn’t need much convincing that journalism was what I wanted to do, so SCSPA didn’t necessarily shape my interests. It confirmed them. However, SCSPA did something even better for me: It connected me to people who were just like me. As an 18-year-old who felt like a freak because I wanted to stay in the newspaper room during lunch, that was huge.

What are your favorite memories from SCSPA events? What did you learn or experience from those conferences that still sticks with you today?

My favorite memory from SCSPA was winning Journalist of the Year in 2011. I truthfully had no idea that I was going to win. My teacher knew, and she purposefully kept it a secret and filmed my reaction. I genuinely didn’t think I was going to win; in fact, you can see me mouth, “I’m not going to win! I’m not going to win!” to my friends sitting next to me. (Little did I know, they all knew I was going to win and kept it a secret!) That’s still one of my favorite memories — of all time — to this day. It made me feel like I belonged somewhere and that I was good at something. The biggest thing I learned from those conferences is that it takes many hands to put together a great piece of content. You’re only as strong as the teammate next to you. Don’t take them for granted, and don’t get an ego.

What advice do you have for scholastic journalists coming up through SCSPA?

Be a sponge. Talk to as many people as you can, write often, and figure out what topics interest you. Also, never change or stifle your personality. Embrace your quirks and your nuances. In today’s extremely transparent media climate, who you are is what gets you the job more than the hard skills. Employers expect everyone to have the hard skills. What they want are people who are unabashedly themselves and bring unique perspectives to the topics they’re covering. In order to do that, you have to be you. I promise you that your weirdness will pay off. It will be the thing that gets you hired. 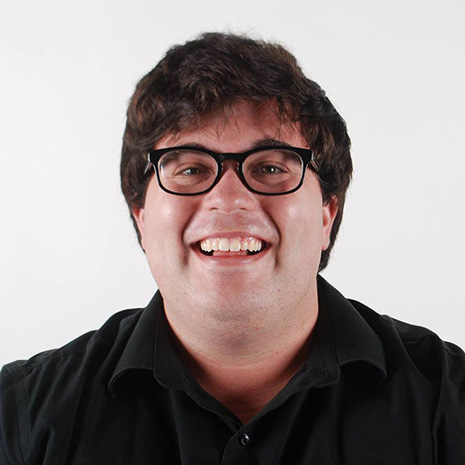 "Having to think critically about entertainment — and not just report on it — defined my voice. It made me realize that my natural opinions about pop culture are lighthearted, humorous, and flamboyant, so that’s how I wrote. When I kept getting positive feedback, I realized that maybe my voice was special, so I refined it. Now, that flamboyancy is what people notice first — and appreciate most — about my writing. I found it because my editors encouraged me to have an opinion. They encouraged me to think. And, most importantly, they encouraged me to let my personality shine through my work."