It didn’t take Summer Huechtker long to jump into the world of student media at the University of South Carolina.

The broadcast journalism freshman took only one journalism course her first semester, but is already working on the Capital City Sports show of Student Gamecock Television (SGTV). She will also start a student position with Gamecock Productions in the spring.

“It’s been cool to get involved so fast,” Huechtker said. “I’ve always known I’ve wanted to do sports.”

At South Pointe High School, Huechtker worked for SPiN News and interned at the Rock Hill Herald, her hometown’s local newspaper, where she learned to edit videos and create packages.

And, of course, she was involved in SCSPA.

“My sophomore year, which was my first year in journalism, was when I went to a bunch of different sessions,” Huechtker said. “That’s actually where I first learned about photography, making images into transition videos. I went back to South Pointe, and that’s when we started to [incorporate] video elements.”

Huechtker served as the online media representative on the SCSPA board. Her junior year, she helped teach a session on social media and how SPiN News, like SGTV, was completely student-run. She returned as a senior to teach sessions on her own.

SCSPA didn’t just give Huechtker a leg up heading into college. It helped her make connections as a scholastic journalist and even directly influenced her decision to attend USC.

“Coming to conferences and also at board meetings, I got to be in this journalism school, so that was really exciting and really helped me want to come here,” she said. “I’d gotten to talk to a lot of people already at SCSPA from different high schools, and then when I came here, I’ve met some people from those high schools who also went to those conferences.”

Huechtker was the recipient of the 2016 SCSPA Scholarship, awarded to one graduating high school senior bound for the USC School of Journalism and Mass Communications. One of her favorite parts of SCSPA conferences was seeing students get recognized for their journalistic achievements.

It wasn’t just the awards that gave Huechtker confidence.

“A lot of people say print journalism is a dying field,” she said. “At SCSPA, they talked all the time about how online journalism is just getting started. They were really good about encouraging new things.”

In October, Huechtker returned to the fall SCSPA conference to teach a session on social media. She said the experience was different, now that she was no longer with South Pointe, but still rewarding.

“Someone came up to me [afterward] and told me they had started doing more video elements, too, and linking theirs to social media,” she said. “I thought it was cool to see how everyone’s growing and adapting to a changing society.”

Huechtker’s advises current scholastic journalists to resist being discouraged when they’re told how difficult it is to break into the field.

“I think it’s just a really cool job to have and pursue because it’s ever-changing,” she said. “SCSPA really helps with that, too. They really emphasize journalism and how it’s growing. They really help students stay up-to-date. They want you to keep pursuing journalism.” 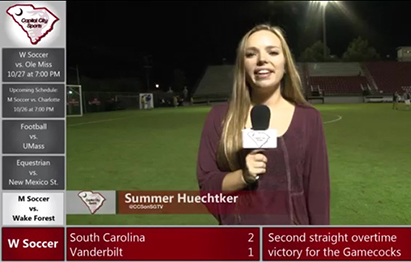