Tell us the story of how you first got started with SCSPA. Did you know, even as a high schooler, that you wanted to pursue journalism / journalism education? Did SCSPA help push you in that direction?

My first encounter with SCSPA was in the summer of 1966, over 50 years ago! I was a rising senior at Camden High School and would serve as co-editor of the Palmetto Leaf in the upcoming year. I attended a summer workshop at the University of South Carolina in the summer of 1966 and experienced the fun and excitement of meeting other student journalists from across the state as well as learning a great deal about the qualities of a good student newspaper. Little did I know at that time that eventually I would end up advising the Palmetto Leaf for 17 years, bringing scores of students to SCSPA workshops and continuing to learn every year from talented SCSPA speakers and USC journalism professors. SCSPA was a critical part of the success of Camden High School's newspaper journalism program and my classroom.

As a high school student, I knew I wanted to teach, but also wanted to continue an interest in journalism. I wasn't sure how I was going to work that out. I majored in English and writing at Winthrop College and, thanks to SCSPA training, I was able to immediately become a productive member of the Winthrop College newspaper. My junior year I served as editor of that newspaper and was active in CSPA, the collegiate equivalent of SCSPA at that time. When it was time for practice teaching my senior year, I was assigned to an English teacher in Blacksburg, SC who was also adviser of her school's newspaper. Then I began to see that I wanted this to be my path. My supervising teacher was an officer of SCSPA's Advisers' Association at the time and helped open that avenue for me after I became a journalism teacher and adviser at Camden High School.

You had a long career as a teacher and newspaper adviser at Camden HS and a communications director for Kershaw County Schools—a career that included a South Carolina Teacher of the Year award, a CSPA Gold Key Award and a Scroggins award. Looking back, what are you most proud of from your time as an educator?

Looking back over my years in education, I realize I was blessed in many ways, not the least of which was having a husband who understood the importance of high school journalism and even started and became adviser of a newspaper at his own school. Also important were district and school level administrators who supported high school journalism. What a privilege it was to work with so many students and colleagues and to learn something from them all. As a teacher, my proudest moments were those when my students succeeded in producing first rate journalism. SCSPA contests and competitions encouraged them and helped make them aware that student journalism really could be "real" journalism when done well. Our motto was always "What would the professionals do?" In those days, this was a great benchmark and guide.

How did SCSPA help you grow as an educator and newspaper adviser?

SCSPA was critical to my growth as an educator and adviser. Great USC journalism folks like Dennis Jones, Jack Hilwig, Bruce Konkle, Ann Herlong, Beth Dickey and others truly cared about high school journalism programs and worked hard to both organize programs and help students and advisers. Excellent South Carolina newspaper advisers like David Knight, Karen Flowers and many others were colleagues whose programs set examples for all. Because of SCSPA, I crossed paths with so many special people who helped me grow as a teacher, a leader and an adviser.

What are some of your favorite memories from SCSPA events? What moments and events still stick with you today?

I have so many special memories of SCSPA activities and events. Weeklong summer workshops were wonderful learning and networking events. Conferences during the year were also very beneficial.  I didn't want my students to miss a one! Competition days where awards helped validate hard work were also highlights. Bus trips with other students and advisers met through SCSPA and SIPA to national student press conferences in places like Chicago, St. Louis and other big cities certainly resulted in special memories and stories.

Reflecting over all my years as an adviser, however, I would be remiss in not mentioning as unforgettable the radical changes that we experienced during those years in both newspaper design and production. First, in the area of design, the shift to modular design from traditional layouts created excitement and endless possibilities to make the Palmetto Leaf's pages look more appealing and readable. It was like a whole new world of creativity opened up for my students. SCSPA workshops and speakers led us through those changes. Secondly in the area of newspaper production, the significance of the introduction of technology cannot be overestimated. Literally in a span of much less than a decade, my staffs went from being excited at being able to borrow the English Department's electric typewriter (!), to having their own typsesetter and layout tables, and then to their very first Macintosh computer! That heavy, clunky computer with the tiny little screen changed newspaper production and many other aspects of journalism forever. What an exciting time it was to teach journalism and learn with my students how to utilize the endless possibilities this new technology introduced!

What advice do you have for scholastic journalists coming up through SCSPA?

Be a sponge -  Learn all you can from SCSPA workshops, your adviser and your fellow staffers.

Read -  Read newspapers, magazines, books, and blogs. If you want to be a good writer, you have to be able to recognize good writing.

Write and rewrite - Your name is going on that story. Make it your best work every time.

Participate - Seize the moment! Become an invaluable member of your staff. Don't just do the big jobs; do the little ones, too. One way I used to help judge editor "material" was to watch who stayed around to help clean up the office after deadline day.

Appreciate - Appreciate this time in your life when you have an opportunity to be a part of something that can make a difference not only in your school but in your life. The memories you are building with your staff are the kind that can last a lifetime!

What are you up to in retirement? What do you miss most about teaching and advising?

Retirement is a fun time of life. I do keep up with a lot of educational issues and have some interesting challenges working part-time as a consultant with BWP & Associates, a national superintendent search firm. I honestly am still using some of the journalistic skills I first learned from SCSPA. As far as what I miss the most—probably it would be those days the Palmetto Leaf would come out, and I would witness the feeling of joy my staffers would have for a job well-done because of their hard work. I hope that was a lesson they carried with them throughout their lives. Today, however, my absolute favorite title is "Grandma" to three precious grandsons. In that role, I still get to do a little teaching, a little advising, and lots of loving. 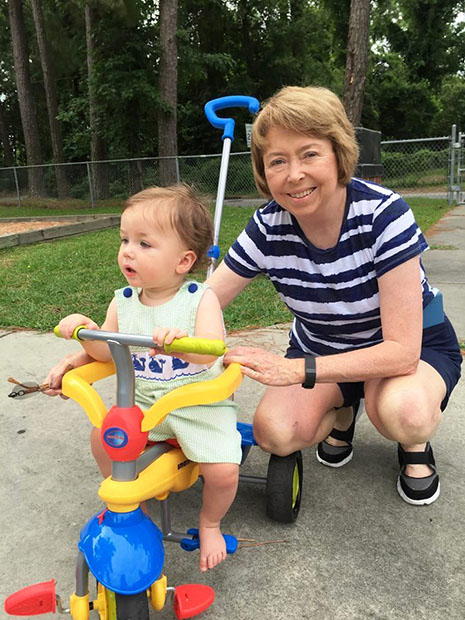 "As a teacher, my proudest moments were those when my students succeeded in producing first rate journalism. SCSPA contests and competitions encouraged them and helped make them aware that student journalism really could be 'real' journalism when done well. Our motto was always 'What would the professionals do?' In those days, this was a great benchmark and guide."